A Naval Academy football star was on his way home to New York on leave when he was killed in the Amtrak Port Richmond train derailment. His mother identified him as Justin Zemser. He was 20 years old. It had earlier been confirmed by the Naval Academy in Annapolis that a midshipman had been killed while he was heading home.

1. His Mother Was So Proud of How Zemser Grew Up

According to his Facebook page, Zemser is a native of Far Rockaway, New York. His mother, Susan, wrote on her Facebook page on May 10, Mother’s Day, that she wished Zemser’s grandmother was still alive because she “would have been so proud” of how he has grown up. He had been due to graduate the Naval Academy in 2017.

2. The Amtrak Trail Was Traveling Over 100 Miles Per Hour

He has been confirmed as one of the seven people killed when an Amtrak derailed while it was en route to New York City from Washington D.C. The cause of the crash has not yet been determined. According to NBC’s Tom Costello, the train’s black box has shown the train was traveling in excess of 100 miles per hour.

3. He Was His High School Class President & Football Captain in Queens

On his Navy Sports profile, it says that Zemser was class president at Channel View and played as a wide receiver for the team’s football team. He was his also high school football captain and was named in the All-Borough team in New York City in 2012. The New York Daily News reports that he graduated in 2013 despite the school’s damage during Hurricane Sandy. The News reported on Zemser and his class mates in 2013. The newspaper notes that Zemser had been “appointed to the U.S. Naval Academy in Annapolis, Maryland.” He and most of his friends at the school had been together since kindergarten, according to the piece. While at the Naval Academy, he was the vice president of the Jewish Midshipmen Club.

In March 2015, he traveled to work in Israel as part of the Jewish Unity Project. According to New York City Council member Eric Ulrich (Republican), Zemser once worked as an intern in Ulrich’s office. The politician wrote on Twitter “Justin was truly a bright, talented and patriotic young man. He will be sorely missed by all who knew and loved him.”

5. So Far, 7 People Have Been Confirmed as Dead in the Train Derailment

Among those still missing after the crash is Philadelphia tech CEO Rachel Jacobs. She is the mother of a 2-year-old. Her last contact was a text to her husband at 8:45 p.m. on the night of the crash, reports CBS Philadelphia. The train derailed just after 9 p.m. 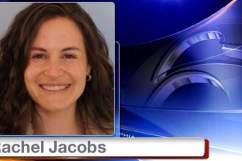 Read More
5 Fast Facts, Breaking News, Deaths, R.I.P.
A Naval Academy football star was on his way home to New York on leave when he was killed in the Amtrak Port Richmond train derailment.