An Amber Alert has been issued for a 14-year-old Tennessee girl who ran away from home to be with a convicted child molester that she met online.

Surgoinsville Police are searching for Hayleigh Wilson, who may be with 41-year-old sex offender Benjamin Shook.

1. They May Be Traveling in a Maroon Ford Explorer

The vehicle Shook and Hayleigh might be traveling in, police say. (AmberAlert.com)

Hayleigh, who is white, 5’5″ and 150 pounds with black hair and hazel eyes, was last seen wearing “a sleeveless Flowery top with dark colored shorts or skirt and boots.”

Shook, who also goes by Ben, is also white and has multiple tattoos. He was wearing “a blue shirt with the letters ‘Ford’ written on it, dark shorts and a camouflage baseball hat.” He is 6’3″ tall, weighs 175 pounds, has blue eyes and brown hair.

“If you have any information on Hayleigh Wilson or Ben Shook, contact the Surgionsville Police Department at 423-272-7121 or TBI at 1-800-TBI-FIND,” the Amber Alert states.

“I’m positive if she’d known that this guy was a sex offender, the child that she is, she would’ve never accepted someone like that,” Eddie Wilson told the news station. “These pedophiles have ways of getting into kids’ minds, and just destroying them.”

Hayleigh left her home in Surgoinsville in East Tennessee at about 10 p.m. on Monday, June 22.

According to the Kingsport Times News, the Surgoinsville Police Chief said Shook met Hayleigh online, and she stole her father’s truck and met Shook at an undisclosed location.

4. They Tried to Use Hayleigh’s Stepfather’s Credit Card at a North Carolina Walmart

Hayleigh was spotted at a Walmart store in Marion, North Carolina, in the early morning hours of June 23, the alert states. The store is located at 2875 Sugar Hill Road in Marion, which is in the western part of the state.

The store is about two hours away from Surgoinsville, Tenneseee, where Hayleigh lives and was reported missing from.

Hayleigh and Shook were recorded trying to use Hayleigh’s step-father’s credit card.

5. Shook Has an Active Warrant for Failing to Register as a Sex Offender in Georgia

Benjamin Shook in a 2014 photo. (Georgia Bureau of Investigation)

His last address is not known, but he previously lived in Gainesville, Georgia and worked at Victory Foods.

According to the Times News, Shook was released from custody and is on parole. It’s not known how long he served in prison, but he has 10 more years of supervised release left on his sentence, according to the newspaper.

Details of the case that led to Shook’s conviction were not immediately available. According to Georgia law, aggravated child molestation is when molestation includes physical injury to a child or sodomy. 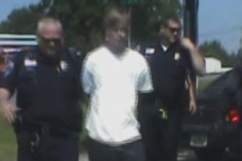 Loading more stories
wpDiscuz
0
0
Would love your thoughts, please comment.x
()
x
| Reply
Police in Tennessee have issued an Amber Alert for a runaway teen believed to be with a convicted child molester Benjamin Shook.