Supriya Jolly Jindal is Louisiana’s First Lady and the wife of 2016 Republican Presidential hopeful Bobby Jindal, who announced his candidacy on Wednesday.

She has lived her entire life in her home state of Louisiana, and is a graduate of Tulane University. The 43-year-old mother of three would be the first Indian-American First Lady in United States history.

Here’s what else you need to know about Supriya Jindal:

1. She Was Born in India & Raised in Louisiana

Louisana Governor Bobby Jindal and his wife, Supriya, with an Indian-American family in 2008. (Getty)

Supriya Jindal was born in New Delhi, India, while her parents were there visiting family, she said in a New Orleans Times-Picayune profile. She has lived her entire life in Louisiana, according to her biography on the Louisiana governor’s website.

She lived in Metairie, Louisiana, until she was four, when her family moved to Baton Rouge. She spent three years of high school in Baton Rouge, before moving back to Metairie for her senior year. 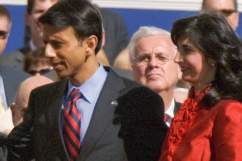 2. She Married Bobby Jindal in 1997 & They Have 3 Children Together

Bobby Jindal with his wife, Supriya, and their then 2-year-old daughter Selia in 2003. (Getty)

Supriya and Bobby Jindal met in high school, but didn’t start dating until after they had graduated, according to her biography on the governor’s website.

“In 1996, after not speaking since high school, Bobby invited Supriya to a Mardi Gras ball after his date cancelled at the last minute. Supriya agreed, and the couple was engaged several months later. Supriya and Bobby were married in October 1997 at St. Joseph’s Cathedral in Baton Rouge,” her biography states.

3. She Has a Degree in Engineering & a Master’s in Business Administration

She has also finished all of the coursework for a PhD from Louisiana State University, in marketing, with only her dissertation remaining.

Supriya Jindal now runs the Supriya Jindal Foundation for Louisiana’s Children, encouraging students to have a strong foundation in math and science, while also bringing modern technology to the state’s classrooms.

“I created the Supriya Jindal Foundation for Louisiana’s Children to harness the power of technology in Louisiana classrooms, to emphasize the importance of science and math, and to help develop the Louisiana workforce of tomorrow,” she says in a message on the foundation’s website. “I hope you or your organization will consider joining me in this important effort by committing to one of our partnership levels. Louisiana has a large manufacturing base that relies on technology and skilled workers – and your partnership in this effort will serve as an investment in developing young talent across the state.”

4. She Was Named as One of the Country’s ‘Best-Dressed Political Wives’

Supriya Jindal was named in 2013 as one of the top-10 “Best-Dressed Political Wives” by Vanity Fair.

My wife made a "best-dressed" list in Vanity Fair! Something I will never accomplish. Smart and beautiful woman! http://t.co/Fw1VkhQCj9

“When (she) appears at state functions, Gov. Bobby Jindal’s better half slips into modern gowns, body-skimming suits and lots of Republican-approved red,” the magazine wrote.

5. The Jindals Both Converted From Hinduism to Catholicism

Both Bobby and Supriya Jindal converted to Catholicism from Hindiusim, according to the Wall Street Journal.