Activist Bree Newsome was arrested on June 27 after she climbed the flag pole outside the South Carolina statehouse in Columbia to remove the Confederate flag in protest.

Video (watch it above) taken at the statehouse and posted to YouTube shows Newsome climbing the pole at about 6 a.m., and her arrest.

While on the pole, Newsome shouted, “You come against me with hatred and oppression and violence. I come against you in the name of God. This flag comes down today.”

The flag was re-raised about an hour after Newsome’s protest and arrest.

Activists have rallied for the flag to be taken down after nine churchgoers, including state Senator and Pastor Clementa Pinckney, were gunned down at the historic black Emanuel AME Church in Charleston, South Carolina, by a racially motivated 21-year-old man.

Bree Newsome climbs the flag pole outside the Charleston, South Carolina, state house to take down the Confederate flag.

Police said Newsome, 30, was arrested and charged with defacing monuments on state capitol grounds, a misdemeanor. James Ian Dyson, who spotted for Newsome while she made her climb, was also arrested and faces the same charge. The pair, both from North Carolina, were taken to a detention center, police said.

The charges is a misdemeanor with a possible punishment of up to three years in prison or a fine up to $5,000 or both.

Newsome and Dyson were later released after posting $3,000 bail.

A spokeswoman for the Department of Public Safety, Sherri Iacobelli, said in a press release that an officer at the statehouse grounds asked Newsome to get off the flag pole, but she refused. After she unhooked the flag, Newsome, who was dressed in climbing gear, including a helmet, climbed to the ground and was arrested. She gave the flag to the officers.

In a statement to The Guardian, Newsome said, “We removed the flag today because we can’t wait any longer. It’s time for a new chapter where we are sincere about dismantling white supremacy and building toward true racial justice and equality.”

Removal of the flag from the statehouse has the support of several lawmakers, including Governor Nikki Haley, but state law requires a 2/3 vote of the legislature for it to be removed.

Confederate flags were removed in other states and companies began to stop the sale of merchandise featuring the flag.

2. The Charges Against Newsome Are Still Pending

The charges against Newsome have not been dropped, despite the state of South Carolina voting to take down the flag.

Filmmaker Michael Moore said on Twitter that he will pay the bail money and any legal fees Newsome has.

Friends of @BreeNewsome – I will pay her bail money or any legal fees she has. Please let her know this. #Charleston #TakeDownTheFlag

The hashtag #FreeBree began trending on Twitter after her protest.

#FreeBree – cuz a black woman's only gonna wait BUT so long before she takes matters into her own hands. #lioness

3. She Is a Filmmaker & Musician Who Graduated From New York University

Bree Newsome is arrested after taking down the Confederate flag in Charleston. (YouTube)

Newsome, a graduate of New York University’s Tisch School of Arts with a degree in Film & Television, is a filmmaker and musician, according to her website.

In high school, she created an anminated short that earned her a $40,000 scholarship from the National Academy of Television Arts & Sciences. The academy’s director called her work, “combination of intellectual horsepower and creative range.”

While at NYU, she won the grand prize in a competition sponsored by her school and MTV for a public service announcement about voter turnout called “Your Ballot, Your Voice.”

According to her website, Newsome wrote her first song when she was 7:

She began writing music for her middle and high school bands and orchestras even before her first formal lesson in composition at the renowned Peabody Conservatory at age 13. A year later, Newsome’s six-part choral piece Revelation 21:4 was performed by the Baltimore Choral Arts Society. Bree was awarded the coveted Paderewski Medal from the National Piano Guild and won a $12,000 scholarship in the vocal arts portion of the Maryland Distinguished Scholars Competition.

She is currently based in Charlotte and is the front-woman for the funk band Powerhouse.

4. She Has Worked as an Activist for Social Justice & Human Rights in North Carolina

Newsome has also worked as an activist for human rights and social justice, and was arrested during a sit-in at the North Carolina capitol, where she and others spoke out against the state’s attack on voting rights, according to her website.

She also serves as the Western Field Organizer for Ignite NC.

5. A Pro-Confederate Flag Rally Was Held Not Long After Newsome’s Protest & Arrest

Demonstrators protest at the South Carolina State House calling for the Confederate flag to remain on the State House grounds. (Getty)

Hours after Newsome’s protest, a pro-Confederate flag rally was held outside the statehouse.

About 60 supporters gathered at the rally, the Charleston Post and Courier reported.

“We consider this flag as a flag of heritage not hate,” Greenville resident Leland Browder, 75, told the Post and Courier. “I don’t hate anybody. We feel like it’s a part of our history. It’s a part of the South.” 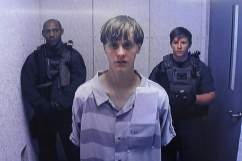 Has Dylann Roof Received $4 Million in Donations? No.