A woman with mental issues and her boyfriend are accused of killing her mother and bragging about it on Facebook. Gypsy Blancharde, 23, and her partner, Nicholas Godejohn, 25, were arrested in Wisconsin, not long after Blancharde’s mother, Clauddinea “Dee Dee” Blancharde, was found brutally killed inside her home in Springfield, Missouri, on June 14.

1. A Facebook Message About Dee-Dee’s Death Said ‘I F**ken Slashed That Pig & Raped Her Innocent Daughter’

Godejohn and Blancharde in their mugshots.

Police first went the Blancharde residence on June 14 after Facebook post appeared in the account that the mother and daughter shared. The status update simply read “That Bitch is Dead!” That message was posted by Gypsy, according to cops. After worried friends asked what that meant, some even wondering if they were watching a movie, the page’s account holder wrote “I f**ken SLASHED THAT FAT PIG AND RAPED HER SWEET INNOCENT DAUGHTER…HER SCREAM WAS SOOOO F**KEN LOUD LOL.” After police arrived at Blancharde’s home, they found Clauddinea Dee Dee dead. Officers believed she had been killed around 24 hours before and that it wasn’t a random killing.

According to documents in the case, Godejohn admitted to officers that he killed Dee Dee. He said that Gypsy asked him to do it. Godejohn said he stabbed her several times and thought about raping her but didn’t.

2. The Local Sheriff Says Gypsy Blancharde May Have Been Faking Her Need for a Wheelchair

The Springfield News-Leader reports that Blancharde is wheelchair-bound because of leukemia and muscular dystrophy. Sheriff Jim Arnott told the media on June 16 that Gypsy Blancharde, along with her mother, could have been faking the need for a wheelchair as part of a donations scam.

In the immediate aftermath of Dee Dee being found dead, Blancharde was considered a missing person. She was arrested less than 24 hours later in Big Bend, Wisconsin, nearly 600 miles away, the hometown of Nicholas Godejohn. His stepfather told WREX that his son had been dating a girl online from Springfield and that he wanted to bring her to Wisconsin. In addition to the killing, Godejohn said that he and Gypsy stole several thousand dollars from a safe in the Blancharde home, according to documents.

4. A Neighbor Called Dee-Dee ‘Selfless’ While Investigators Say She’s Been Alienated From Her Family for Financial Fraud

One of Blancharde’s neighbors, Kim Blanchard, no relation, told the News-Leader, that the family moved to Missouri from Louisiana after being impacted by Hurricane Katrina. Blanchard said Dee Dee was selfless. “It may have been part of Katrina, or it may have just been part of her, but she gave everything.”

The Blancharde’s pictured in 2008. (Screengrab via KY3)

On her Facebook page, Dee Dee calls herself “A VERY BLESSED MOMMY” and says “LIVING IS EASY WITH EYES CLOSED.” KY3 reports that the Blancharde’s “may” have committed fraud in gaining a home under Habitat for Humanity in 2008. The station also says, citing police sources, that “Dee Dee” has had not contact with her family for years due to her various fraudulent activities and that public records show three different birth dates for Gypsy Blancharde. When the family got their home in 2008, Gypsy was said to be 12 years old. The pair were even interviewed by KY3.

5. The 2 Could Face the Death Penalty

According to the Green County Sheriff’s Office, Blancharde and Godejohn are accused of murdering Dee Dee as well as armed criminal action. Both have bonds of $1 million. Blandcharde and Godejohn could face the death penalty in the case. 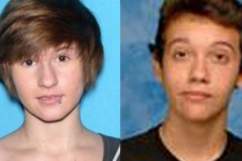 Loading more stories
wpDiscuz
9
0
Would love your thoughts, please comment.x
()
x
| Reply
A woman with mental issues is accused, along with her boyfriend, of killing her mother and bragging about it on Facebook.