John Nuttall And Amanda Korody have been found guilty of plotting to bomb the British Columbia legislature on Canada Day two years ago.

The husband and wife were accused of conspiracy to commit murder, placing an explosive in a public place and possession of an explosive substance.

They were both found guilty on all counts by the Vancouver jury.

1. It Was Almost Declared a Mistrial

The judge said the Crown’s closing speech – which included a video of a mock explosion – was so inflammatory and inappropriate it took her breath away.

The jury began deliberations at 9.30am on Sunday. The couple had pleaded not guilty to the charges.

2. They Planned to Set Off Pressure Cooker Bombs

The Crown argued the couple planned to kill innocent people as part of a “Holy War” against the West and were fully aware of what they were doing.

In an unusual twist, the conviction won’t be entered until next week, after the defense has a chance to argue that police entrapped the couple into the plot during the elaborate sting operation.

3. They Were Caught in a 4-Month Sting by the RCMP

Inside their apartment (RCMP)

Lawyers for the couple argued they were manipulated by the RCMP officers.

The couple maintained their plan to detonate the bombs at the legislature would not have materialized had they not been pushed by police.

4. The Plot Was in Retaliation For The Treatment of Muslims

Prosecutors alleged Nuttall and Korody, both recent converts to Islam, planned the attack to respond to what they perceived as the mistreatment of Muslims overseas.

The videos featured Nuttall and Korody explaining their plan to the undercover officer and then driving with the officer to pick up bomb-making supplies such as pressure cookers, clocks and wires.

5.They Were Recovering Heroin Addicts With Cash Problems

Defense lawyers described the couple as former heroin addicts with money issues who were given a purpose when befriended by undercover RCMP officers, who gave them money, clothes and spiritual guidance.

In one video played in court, Nuttall tells an officer he was short about $300 for his rent payment, which was due in the next couple of days. He said Korody was stressed out about the rent and worried they’d become homeless. 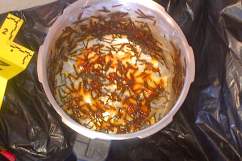