A 19-year-old from North Carolina planned to buy an AR-15 at a gun show and begin a guerrilla war in support of ISIS. The FBI says Justin Nojan Sullivan of Morgantown told an undercover agent about his dreams of killing 1,000 Americans and starting an Islamic War in the U.S.

1. The FBI Says Sullivan Gave an Undercover Agent the Chance to Join ‘The Islamic State of North America’

According to the criminal complaint, an undercover agent made contact with Sullivan in April 2015. After some discussion, Sullivan identified himself as “a mujahid” and was a Muslim convert living in the United States. Not long after first making contact, the feds say that Sullivan asked the agent to join “The Islamic State of North America.”

2. Sullivan’s Father Broke Down & Called the Police on His Troubled Son in April 2015

A flag-waving ISIS supporter in Syria.

Police in Burke County, North Carolina, were first alerted to Sullivan’s alleged plans when his father had a break down and called authorities, according to the feds. Sharon Smith of WBTV reported that Sullivan’s parents were in court during his initial hearing and that they were “heartbroken.”

Part of Sullivan’s plan included having his parents killed, according to the criminal complaint. He concocted a scheme with the undercover agent in which Sullivan’s parents would be killed before the mass attack took place. Sullivan lived at home with his parents at 5474 Rose Carswell Road in rural Morgantown, North Carolina. The suspect was arrested there on June 19 without incident.

4. Sullivan Could Be Looking at 40 Years in Prison

In adherence to anti-terror laws in the U.S., Sullivan could face 20 years in prison for trying to support material to ISIS. He also faces 20 years for two firearm related charges, including the use of an unlicensed silencer.

So far in 2015, dozens of suspected ISIS supporters have been arrested by the FBI. The most recent was Abdul Malik Abdul Kareem, a Phoenix man who was indicted on federal charges related to his alleged role in the failed May terror attack on the “Draw Muhammad” event in Garland, Texas, that left the two gunmen dead. 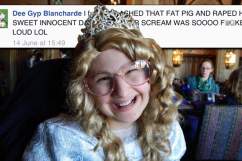 Loading more stories
wpDiscuz
5
0
Would love your thoughts, please comment.x
()
x
| Reply
A 19-year-old from North Carolina planned to buy an AR-15 at a gun show and begin a guerrilla war in support of ISIS. He wanted to kill his parents and 1,000 more Americans.