An American Airlines executive who was part of the company’s initial response to 9/11 has been arrested in Pennsylvania on charges that he tried to set up a sexual encounter with a mother and her 10-year-old daughter who were really undercover cops.

Ray Howland, 55, of Arlington, Texas, was arrested Monday in Moon Township, Pennsylvania, as part of a child sex sting, Attorney General Kathleen Kane said in a press release. Howland was charged with criminal attempt to commit rape of a child, involuntary deviate sexual intercourse, unlawful contact with a minor, criminal attempt to commit indecent assault and criminal use of a communication facility.

Here’s what you need to know about Howland and the case:

1. Police Say They Found Howland Through an Advertisement Looking for a ‘Family’ or ‘Girls’ for Sex

Police said in the criminal complaint that the undercover investigation began after agents found an advertisement by an adult male named “Ray” who was trying to find a “family or a couple if girls” to engage in sexual relations, the attorney general said in a press release.

“I’d love to find a mother/daughter pair (or more) of sisters, or a couple of young women interested in getting together for some fun tonight,” the post on an unidentified website said, according to WTAE.

The advertisement also claimed Ray planned to travel to Pennsylvania for business.

2. He Allegedly Sent Told the ‘Mother’ What Sexual Acts He Wanted to Engage In

Howland sent the “32-year-old mother” text messages and emails where he “explained in detail … the sexual acts he hoped to engage in,” agents with the Office of the Attorney General’s Child Predator Section said.

He was arrested when he arrived in Moon Township, where he expected to meet the woman and her daughter. Police said they are investigating whether Howland contacted any real families or women to set up similar encounters.

Howland told the “mother” he was staying at a hotel in Moon Township.

“I’ve had a fantasy of being with a mom and daughter for a long time. I’m not really too concerned with ages as long as everyone is comfortable and in agreement. So young is fine with me,” he told the mother, according to court documents obtained by WPXI.

He also told the undercover agents, “I work for an airline as an operational manager, so no law enforcement ties with me. I don’t want to go to jail either and I don’t get the feeling that you are setting me up either.”

3. Neighbors Said He Is Known as a ‘Good Father & Husband’

Neighbors in Howland’s hometown of Arlington, Texas, told WFAA that they were “speechless” when they heard the news.

“I don’t even know how to react to something like this,” Howland’s neighbor Freddy Lopez told the Texas news station. “It blows my mind. It really scares me, because there’s lots of kids in this neighborhood.”

Other neighbors said Howland is a religious man and a good father and husband.

Howland’s Facebook page shows that he has a college-aged son and also includes pictures of him and his wife on trips around the world.

4. He Was a Manager in American Airlines Control Center on 9/11 & Is Named in the 9/11 Commission Report

Howland was a manager in American Airlines’ system operations control center on 9/11 and is mentioned multiple times in the 9/11 Commission Report.

He was on the phone with employees who were talking to flight attendants on Flight 11 after it was hijacked and before it crashed into the North Tower of the World Trade Center.

According to The Associated Press, Howland received some of the first calls from Logan International Airport reporting the hijacking of Flight 11. Transcripts included in the 9/11 report show that Howland told the Boston employees to stay quiet.

“We don’t want this getting out,” Howland said. “We’re aware of the situation. We’re dealing with it right now. So let us deal with it.”

Howland also told a dispatcher in Boston to not tell a flight attendant he was talking to that the ground operations center wasn’t in contact with the cockpit.

“I mean, we don’t really want to give a whole lot of information to that flight,” Howland said.

5. American Airlines Says the Company Is ‘Cooperating’ With Authorities

An American Airlines logo is seen behind a ticket counter at Chicago’s O’Hare airport on August 13, 2013. (Getty)

American Airlines released a statement about the arrest:

American Airlines holds its employees to the highest level of ethical standards. Employees who violate these standards are subject to disciplinary action, which may include immediate termination. We are cooperating fully with law enforcement and do not intend to comment on this case publicly out of respect for all involved

According to his LinkedIn profile, Howland is a senior manager in American Airlines’ integrated operations control division based. He says he has more than 30 years in aircraft operations experience, both commercial air carrier and general aviation, and is a licensed private pilot and aircraft dispatcher.

He was a flight dispatcher from 1989 to 2000, before becoming a dispatcher’s supervisor in 2000. He is a graduate of Presbyterian College. 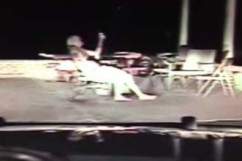 Loading more stories
wpDiscuz
4
0
Would love your thoughts, please comment.x
()
x
| Reply
Ray Howland, an American Airlines exec who was part of the company's 9/11 response, was arrested for trying to have sex with a 10-year-old girl and her mother.