A Georgia man was shot by police after firing an AK-47 at an officer during a standoff early Monday morning in an incident captured on a dashcam.

The Georgia Bureau of Investigation released the video Monday afternoon. Terry Caldwell, 60, suffered non-life-threatening injuries. He fired twice at the officer, who was not injured, police said.

An adult civilian was in the car with the deputy for a “ride-along” and was also not injured, police said.

Police said Troup County Sheriff’s Deputy Stephen D’Angelo responded to a home on Hamilton road at about 12:05 a.m. Monday after a neighbor called police to report that Caldwell was outside shooting a gun.

Terry Caldwell suffered non-life-threatening injuries after he was shot after firing an AK-47 at a cop. (Georgia Bureau of Investigation via YouTube)

D’Angelo arrived to find Caldwell sitting in his carport. The video shows D’Angelo asking Caldwell about an object in his lap. Caldwell yells incoherently at D’Angelo and then raises the gun from his lap, firing twice toward the deputy.

D’Angelo returend fire four times, hitting Caldwell in the elbow and thigh, police said. After being shot, Caldwell drops the gun, sits back in his chair and drinks from a canned beverage.

D’Angelo can be heard calling in the shooting, saying “I need some help over here. Shots fired.”

Caldwell was taken to a local hospital. He will be charged with aggravated assault on a peace officer and possession of a firearm during the commission of a crime after he is released from the hospital, Sgt. Stewart Smith told the Columbus Ledger-Enquirer.

“Once the deputy got there, he encountered the suspect sitting under his carport in a chair and (he) was ranting and raving about something. You can’t really tell what he was mad about, but during that brief encounter, he picks up a gun and shoots a couple of times toward our deputy,” Troup County Sheriff James Woodruff told the LaGrange Daily News. “The deputy returns fire, striking him twice. He struck him in the elbow, which ended up going through into his torso, and he struck him in the leg.”

The Georgia Bureau of Investigation is reviewing the shooting. D’Angelo, who has been with the sheriff’s office since August 2014, has been put on paid leave pending the outcome of that investigation.

“We have no reason to believe this is anything other than a justified shooting,” Woodruff said. 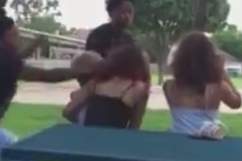 Loading more stories
wpDiscuz
1
0
Would love your thoughts, please comment.x
()
x
| Reply
Terry Caldwell, a drunk 60-year-old Georgia man, was shot by police after firing an AK-47 at an officer outside his home. Watch video of the shooting here.