Shocking use of force against gay pride marchers in Istanbul. pic.twitter.com/eD76fhjpci

Disturbing cell phone footage has been released showing an LGBT activist waving a rainbow flag being attacked by Turkish police with a water cannon. The man resists the water pressure for some time before being knocked over onto the city street. Onlookers then approach the police vehicle but don’t appear to retaliate violently.

Pink News reports that other Pride celebrators in Istanbul reported the use of rubber bullets and teargas by police dressed in riot gear.

According to a Wikipedia article about LGBT rights in Turkey:

Lesbian, gay, bisexual and transgender (LGBT) persons in Turkey face legal challenges not experienced by non-LGBT persons. Same-sex sexual activity was legalized in the Ottoman Empire (predecessor of Turkey) in 1858 and in modern Turkey, homosexual activity has always been a legal act since the day it has founded in 1923.

Although discrimination protections regarding sexual orientation and gender identity or expression have been legally debated, they have not yet been legislated. Public opinion on homosexuality has generally been conservative and LGBT people have been widely reported to experience discrimination, harassment and even violence in recent years.

Turkey has seen an influx in conservative Islamism in recent years, but not to the extreme like other groups like ISIS have implemented. OpenDemocracy.com writes:

Turkey’s Islamists have not implemented these restrictive practices and rules formally because this would still require a major overhaul of the legal system, and they see ISIS as “uncivilized”. But in everyday life social pressure is exercised in more subtle ways and people are intimidated through quiet repression on the street. 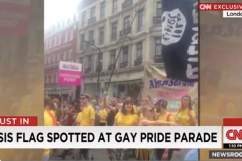