Anti-terrorism cops gunned down a machete-wielding man today outside a CVS store in Boston. Usaama Rahim has been named by his brother, Ibrahim, as the suspect shot dead by the Joint Terrorism Task Force around 7 a.m. June 2. According to police sources, Usaama had been radicalized by ISIS propaganda and may have been preparing an attack on law enforcement. He was 26 years old.

1. His Brother Said Usaama Was Going to Work When He Was Shot 3 Times in the Back

Pray4 my younger brother Usaama Rahim shot 3 X in his back by Boston Police then dying His last words I can't breathe pic.twitter.com/XcZWeiigtg

The brother added that Usaama was on the phone to his father at the time because he felt like he needed a witness. On Twitter, Ibrahim Rahim said that his brother’s last words were “I can’t breathe.”

2. The Officers ‘Had to Take a Life,’ According to the Commissioner

Boston Police Commissioner William B. Evans told the media that “Our officers tried their best to get him to put down the knife. Unfortunately, they had to take a life.” Evans explained that members of the Joint Terrorism Task Force, combining FBI agents and Boston police, followed the man to the CVS. The machete-wielding suspect confronted the officers. After he refused to back down, he lunged at the officers. He was then shot dead as both a member of the Boston Police Department and an FBI agent opened fire, reports the Boston Globe.

After the shooting, he was rushed to Brigham and Women’s Hospital where he was pronounced dead. Neither of the officers who opened fire was physically injured, but they have been treated for stress. In a press conference after the shooting, an FBI spokesman said there was no arrest warrant for Usaama and that officers were just trying to question him. The representative didn’t say if the officers were plain clothes or not. My Fox Boston reports that agents had other individuals under surveillance in the area.

3. His Brother Is a Respected Imam in Boston

According to the Ella Collins Institute website, Ibrahim Rahim has, for the past 22 years “worked diligently to share his knowledge with the Muslim community of Boston and around the nation.” He lists his favorite saying as “Traveling through a strange place, on my way back to Allah.” Ibrahim studied at the Islamic University of Medina in Saudi Arabia. Usaama was his youngest brother.

4. He Was Armed With a ‘Large Military-Style Knife’

Here's the knife that Usaama Rahim had when approached by @bostonpolice. pic.twitter.com/AfuaNVGv48

FBI Special Agent in Charge Vincent B. Lisi told the Boston Herald that the machete being carried by the suspect was a “large military-style black knife,” adding the suspect could have “done a lot of damage.” Later, an FBI spokesman said Usaama was under 24 hour surveillance. The Joint Terrorism Task Force is a partnership between the FBI and local police across the country. In addition to terrorism, the force investigates cases of wire fraud and identity theft.

5. Boston Is Still a City on Edge

This potential terrorism shooting comes as Dzhokhar Tsarnaev’s college friends are due to be sentenced in Boston. The friends are accused of covering up evidence linking the Boston Marathon Bomber to the 2013 attack. For his role in the obstruction, Dias Kadyrbayev was sentenced to 72 months in prison. 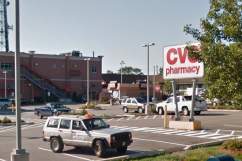 Loading more stories
wpDiscuz
25
0
Would love your thoughts, please comment.x
()
x
| Reply
Usaama Rahim has been named by his brother, Ibrahim, as the man who was shot dead by the Joint Terrorism Task Force at a CVS in Boston.