The Oklahoma State Patrol has released dashcam footage showing assistant pastor Nehemiah Fischer appearing to lunge at an officer just moments before he was gunned down.

The video was made public after the grieving family of the married 35-year-old shooting victim insisted he was a man of God who was incapable of violence and read the Bible every day.

Officials say Fischer and his brother, Brandon, 40, attacked the troopers as they tried to rescue them from flood waters in Okmulgee County, Oklahoma. The brothers’ truck had become stuck in the high water.

“He was the nicest person I’ve ever met. He was very giving. He made me want to be a better person,” she said of her husband, who was the assistant pastor at Faith Bible Church.

Next month would have been their one-year wedding anniversary, she said. “We loved each other. It was perfect. I was so thankful for my life.”

Mrs Fischer asked to see the dashcam footage because she couldn’t believe her husband would fight with law enforcement.

OHP spokesman Capt. Paul Timmons told reporters at Monday’s news conference that Fischer was shot after being ordered to leave a flooded area.

But instead of leaving, Fischer allegedly grabbed a trooper and knocked him to the ground.

In the video, a pair of OHP troopers, identified by the Daily Mail as Mark Southall and Michael Taylor, are seen repeatedly asking Fischer and his brother to leave a flooded area and seek higher ground.

As the siblings tramp through water toward the officers, the assistant pastor attacks one of them, prompting his partner to draw his service weapon.

Fischer’s father, J.R. Fischer, told The Associated Press  that the aggressive behavior didn’t sound like that of his son, who studied the Bible daily.

‘When it came to being a Christian man, he was the real deal,’ he said in a phone interview.

The troopers are on administrative leave. Timmons said one has eight years’ experience and the other has one year of experience. 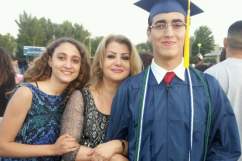