The New York Stock Exchange has been shut down because of a technical glitch and hundreds of Twitter jokes about Bane has made the Batman supervillain a trending topic.

In The Dark Knight Rises Bane attacks Gotham’s stock exchange, modeled after the NYSE, in an attempt to bankrupt Bruce Wayne. Twitter users couldn’t resist comparing the outage to the movie:

It's Bane. Bane has taken over #NYSE. pic.twitter.com/JzjaIj4tXX

So, the New York Stock Exchange is down? Probably Bane. pic.twitter.com/feQsWpLtvj

#Bane is back to take down the #NYSE, call the National Guard, stop this masked menace! http://t.co/IXgAcSFSRM pic.twitter.com/ZTVFWlvIEa

Not the first time NYSE's had trouble #Bane pic.twitter.com/6o74aQ6qne

The NYSE suspended trading at about 11:30 a.m. because of the computer glitch, which the exchange and U.S. officials say was not caused by hackers. It is also not connected to the major outage that grounded all United Airlines flights Wednesday morning. 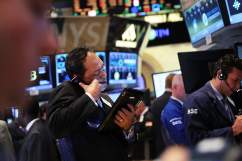