Seven fires at historically black churches across the South have burned in the weeks since nine people were fatally shot at the Emanuel AME Church in Charleston, South Carolina, leading to speculation on social media about whether the fires are being intentionally set.

Federal authorities are investigating several of the fires, with the Washington Post reporting that three of the fires are being probed as arsons.

On Twitter, #WhoIsBurningBlackChurches has trended this week, with many observers calling for more media scrutiny into the fires.

The fires have been at churches in multiple states and there has not been any indication that they are connected.

See a list of the fires and details of each case here.

ATF agents investigating at the scene of a church fire. (ATF photo)

The ATF said it is the lead agency investigating the fires at Briar Creek Road Baptist Church and God’s Power Church of Christ, where arson is a possible cause. It is also investigating fires at Fruitland Presbyterian Church in Memphis, Tennessee, Greater Miracle Temple Apostolic Holiness Church in Tallahasee, Florida, and Glover Grove Baptist Church in South Carolina. It also sent agents to the Mount Zion AME Church fire in Greeleyville, South Carolina.

The Washington Post reported that arson is suspected in three of the six fires.

The Post reports that arson is also a possible cause at the College Hill Seventh Day Adventist in Knoxville, Tennessee to the list, where hay bales and a church van were burned on June 21. The ATF has not said if it is involved in that investigation.

2. Some of the Fires Are Believed to Have Started Accidentally

Of the seven fires that have occurred at predominantly black churches since the shooting, at least four are believed to have been started by accidental causes. The investigation into the fire Tuesday night in South Carolina is still in the early stages, but anonymous sources have told the Associated Press and CNN that the fire was not likely a case of arson. CNN reports that it was possibly started by a lightning strike.

Other fires have been ruled as accidental due to electrical issues, including those at the Greater Miracle Temple Apostolic Holiness Church in Florida and the Disciples of Church Ministries in Jackson, Mississippi. 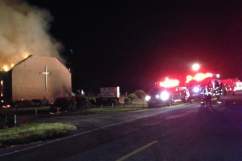 How Many Black Churches Have Burned Since the Charleston Shooting?

3. The NAACP Has Told Black Churches to ‘Take Necessary Precautions’

The fire at the South Carolina church on Tuesday night came just hours after the NAACP warned black churches to “take necessary precautions” because of the string of fires at historically black churches.

“The recent church burnings and terrorism in Charleston are a part of a long-standing attack on the institution,” the NAACP said in a Facebook post.

“After tireless work and congressional hearings that led to the Church Arson Prevention Act being passed in 1996–almost 20 years later, we must again seek justice, investigate and find ‪#‎WhoIsBurningBlackChurches‬. Six black churches have burned since the terrorist attack at Emanuel AME Church.”

4. Black Churches Have Historically Been a Target for Racists

The fires have brought back memories of the burning of black churches in the south, a racist practice that dates back into the 1820s, according to the Washington Post.

It has also recalled a string of fires at black churches in the mid-1990s. At least some of those more than 600 fires were found to have been intentionally set.

President Bill Clintonand ReverendTerrence Mackey pray in front of the new Mt. Zion AME Church in 1996 before Clinton spoke at the dedication of the new church. The church replaces one destroyed in 1995 by a suspected arsonist. The church burned again on June 30, 2015. (Getty)

The Mount Zion AME Church in Greeleyville, South Carolina, first burned down 20 years ago. That fire was set by two men who claimed to be affiliated with the Ku Klux Klan, according to a 1996 article from the Chicago Tribune.

The church was later rebuilt, with then President Bill Clinton speaking at the re-dedication ceremony in 1996.

“Whoever wrote this letter has taken the time to find out who I am which means you may know my children, my grandchildren, and I have no clue who you are,” Pastor Mary Rhodes, of the Society Hill AME Church, told the news station.

The threats are being investigated by local law enforcement.

Loading more stories
wpDiscuz
1
0
Would love your thoughts, please comment.x
()
x
| Reply
Black churches across the South have burned down in the weeks since nine people were gunned down at the Emanuel AME Church in Charleston, South Carolina.