David Vincent Moore and his partner are a couple in Morehead, Kentucky. They have been together 17 years and have lived in Morehead for 10. They recently went to the Rowan County courthouse to get married, as the Supreme Court’s marriage equality ruling mandated, but were denied a license by the county clerk after having to wait an obscene amount of time.

Finally called to the clerk with police presence, they presented a letter from the Governor of Kentucky and the Supreme Court ruling stating that same sex marriage was legal, but the county clerk said that she was unable to give them a marriage license but that they could go to any other county in Kentucky to obtain one. Moore told her that they owned property and paid taxes in the county. She then deferred them to her superior, Kim Davis. Davis then said she would speak to them, but told them that she would not do it while being recorded on camera.

Davis has said that her Christian beliefs prevented her from complying with the Supreme Court decision, so she decided to issue no more marriage licenses to any couple, gay or straight.

Watch the entire encounter above. 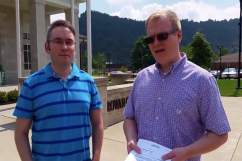 Loading more stories
wpDiscuz
4
0
Would love your thoughts, please comment.x
()
x
| Reply
David Vincent Moore and his partner live in Morehead, Kentucky. They went to the Rowan County courthouse to get married but were denied a license by the clerk Kim Davis.