Happy Independence Day! Celebrate the freest nation on earth this July 4th with these inspiring quotes by presidents and more about what it means to be a patriot. Because while it’s a day of celebration, our freedom isn’t free and our forefathers knew what they were sacrificing when they signed the Declaration of Independence. Ever since then brilliant politicians, authors, and more have weighed in on what it means to be a true “patriot.” Read some of the best quotes below.

1. “America was not built on fear. America was built on courage, on imagination and an unbeatable determination to do the job at hand.” – Harry S. Truman, 33rd President of the United States

2. “It was my duty to shoot the enemy, and I don’t regret it. My regrets are for the people I couldn’t save: Marines, soldiers, buddies. I’m not naive, and I don’t romanticize war. The worst moments of my life have come as a SEAL. But I can stand before God with a clear conscience about doing my job.” – Chris Kyle, United States Navy SEAL and the most lethal sniper in U.S. military history

3. “The tree of liberty must be refreshed from time to time with the blood of patriots and tyrants.” – Thomas Jefferson, American Founding Father and 3rd President of the United States

4. “Loyalty to country ALWAYS. Loyalty to government, when it deserves it.” – Mark Twain, American author

6. “A patriot must always be ready to defend his country against his government.” – Edward Abbey, American author and essayist

7. “Is life so dear or peace so sweet as to be purchased at the price of chains and slavery? Forbid it, Almighty God! I know not what course others may take, but as for me, give me liberty, or give me death!” – Patrick Henry, American attorney, planter and politician

8. “I love America more than any other country in the world and, exactly for this reason, I insist on the right to criticize her perpetually.” – James Baldwin, American novelist, essayist, playwright, poet, and social critic

9. “All wars are civil wars because all men are brothers… Each one owes infinitely more to the human race than to the particular country in which he was born.” – François Fénelon, French Roman Catholic archbishop, theologian, poet and writer

10. “In the face of impossible odds, people who love this country can change it.” – Barack Obama, 44th and current President of the United States 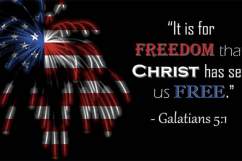 Read More
4th Of July, Inspirational Quotes, July 4th
Happy Independence Day! Celebrate the freest nation on earth this July 4th with these inspiring quotes by presidents and more about what it means to be a patriot.