An Australian surfer was attacked by a shark on live television on Sunday during the J Bay Open in South Africa. Mick Fanning, 34, said he survived the attack by punching the shark in the back.

“I was just sitting there, I was just about to start moving and then I felt something grab … get stuck in my leg rope,” Fanning said after the attack. “I instantly just jumped, like away, and he kept coming at my board. I was just kicking and screaming. I saw fins, I didn’t see teeth. I was waiting for the teeth.”

Fanning was pulled from the water by a rescue team and the competition was halted. Another finalist, Julian Wilson, was also taken out of the water. Neither of them were injured.

Fanning had his back to the shark as it approached him. (YouTube/World Surf League)

The World Surf League, which was hosting the tournament in Jeffreys Bay on the Eastern Cape of South Africa, said in a statement:

We are incredibly grateful that no one was seriously injured today. Mick’s composure and quick acting in the face of a terrifying situation was nothing short of heroic and the rapid response of our Water Safety personnel was commendable — they are truly world class at what they do.

The safety of our athletes is a priority for the WSL and, after discussions with both Finalists, we have decided to cancel the remainder of competition at the J-Bay Open. We appreciate the ongoing support we have in South Africa and once again want to express our gratitude to the Water Safety Team. 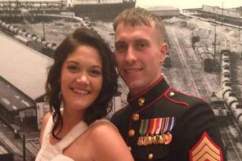 Read More
Australia, Breaking News, Surfing
Australian surfer Mick Fanning survived a shark attack on live TV on Sunday by punching the shark in the back during a competition in South Africa. See the video here.