Rumors and conspiracy theories have circulated on Twitter and elsewhere on social media about the booking photo of Sandra Bland. The photo was released to the public after Bland’s death became a news story in Texas and in her home of Illinois, and many have raised questions about whether it was edited before it was released.

Bland was found dead on July 13 in a Waller County, Texas, jail cell, three days after she was arrested for assaulting a Texas state trooper following a traffic stop for failing to signal a lane change. A dashcam video of the arrest by Trooper Brian Encinia that showed apparent violations of procedure by the trooper and questions about how she died made her death a national news story.

Here’s what you need to know about her mugshot:

1. The County Released Video to Dispel Rumors That Bland Was Dead When Her Mugshot Was Taken

One rumor that began circulating on Twitter on Wednesday and Thursday, more than a week after she died. Those who are speculating that she is already dead say it appears she is not standing up for the photo.

“You will see video here today that shows she was alive and well when the mug shot was taken,” Waller County Judge Trey Duhon said at a press conference on July 28 as the county released video showing Bland being taken from her cell to have her mugshot taken. Watch the video below:

Officials said they have received death threats based on the rumor. See some of the theories below:

One explanation for the theory that Bland was already dead when the mugshot was taken. (Twitter)

The Daily Beast spoke to forensic experts who backed-up the county.

“Now, theoretically, you can set up a photo of a dead person to look alive,” Dr. Michael Baden, who completed a private autopsy of Michael Brown after he was killed in Ferguson, told the news website. “But to say that she’s dead from the photo is ridiculous because you can say that about almost any head photo. You have to use evidence.”

Another expert, Dr. Adel Shaker, said, “There’s nothing in the photo to indicate she’s dead. Period.”

“There’s nothing to indicate she’s dead in that photo, and for people to make the assumption that there’s a big conspiracy. what’s the purpose of it? It doesn’t make sense. There are too many witnesses,” Baden said. “I would say that—having seen hundred of mugshots—this is an ordinary mugshot of a person who’s not happy about their situation.”

2. A Blurry Booking Photo Taken From the Side Has Also Raised Questions

Bland’s mugshot from the side view. (Waller County Sheriff)

To help clear up the rumors about the mugshot, journalists have asked for the photo taken from the side to be released at a higher quality. The only publicly available image showing her from the side is blurry and dark, and was released as part of the booking documents from her jail intake forms.

The new clearer image has not yet been released. 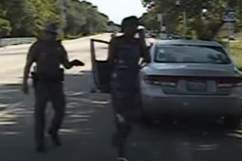 3. A Photoshopped Photo Has Circulated on Twitter Making it Seem Her Eyes Were Rolled Back

Apparently the mugshot on the right is edited and the left is real. This is sickening. #SandraBland pic.twitter.com/QrYZ29brbt

Adding to the rumors on social media on Thursday was a photo that was apparently Photoshopped or altered to make it look like her eyes were rolled back into the head. Twitter users claimed that the photo with her eyes rolled back was the real photo and that jail officials edited her eyes to make it seem like she was alive.

It’s not clear where the fake photo of her eyes rolled back originally came from.

4. The County Jail Says Not All Inmates Are Photographed in Street Clothes

Another question raised about Bland’s mugshot is why she was wearing a prison jumpsuit, when many other Waller County jail mugshots available online show inmates in their street clothes, with the photo presumably taken as soon as they arrived at the jail.

Waller County Sheriff Glenn Smith, said in a press release, “Depending on how many inmates are being processed … an inmate’s photography may be taken in their original clothing or the inmate may be dressed in orange.” 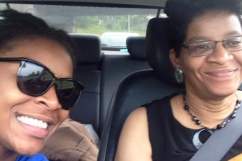 5. Other Inconsistencies Have Raised Questions About the Investigation Into Bland’s Death

There have been several conspiracy theories and rumors, along with actual inconsistencies and mistakes, since Bland’s death. Activist DeRay McKesson published an extensive list of those questions at the website whathappenedtosandrabland.com.

The original video posted by the Texas Department of Public Safety showing the traffic stop included odd cuts and repeated footage that made it appear to have been edited. The agency said the video was not edited and was corrupted during the upload to YouTube. That original video was taken down and a new video was uploaded.

There were also inconsistencies in a booking form where Bland talked about mental health issues, according to a Houston Chronicle reporter:

Report from jail said she told jailers she did try to commit suicide in 2015 with pills.

The sheriff’s office told the Texas Tribune that was because she was screened twice, and gave different answers each time:

Also, a local news reporter observed that a Bible left in Bland’s cell was closed when one television took a tour, and then was open to a Psalm the next day when he was shown the cell: 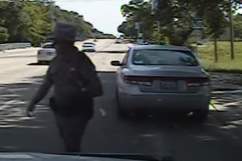 Loading more stories
wpDiscuz
220
0
Would love your thoughts, please comment.x
()
x
| Reply
Sandra Bland's mugshot has created conspiracy theories and rumors, including that it was taken after she was already dead and that it was edited by officials.