Selena Lewis, 16, was killed in an accidental shooting in North Carolina. (Facebook)

A 16-year-old North Carolina girl was fatally shot while trying to take a picture of her boyfriend’s friend, who said he didn’t realize the rifle he was holding was loaded.

Selena Lewis, of Maiden, died at a local hospital after she was shot Sunday night by 21-year-old Clayton Webb Jr., the Catawaba County Sheriff’s Office said. Lewis was with Webb and her boyfriend, 21-year-old Christopher Lynch at a home in Newton, where they had gone for Webb to check out the rifle, which was for sale.

1. Webb Said He Didn’t Realize the Gun Was Loaded Because There Wasn’t a Magazine Attached

Police told the Hickory Record that Webb said he didn’t realize the rifle was loaded because it didn’t have a magazine.

“There was one in the chamber,” Captain Joel Fish of the Catawaba County Sheriff’s Office told WBTV.

The gun fired and hit Selena Lewis in the chest as she stood in front of Webb to take a picture of him.

“It’s unreal. It truly is. It doesn’t matter if the clip is in there or not — always check the chamber. Before you even look at it, check the chamber,” Brent Lewis, Selena’s brother, told WSOC-TV.

“You treat all guns as loaded and you always make sure it is unloaded. Even if someone hands you the weapon and says it’s unloaded, you go ahead and check it again,” Fish said.

The shooting happened at about 5 p.m.

Lewis was shot in the chest, police say. (Facebook)

“I heard a pop and then a scream,” Tina Ying, who lives near where the shooting happened, told WBTV. “I saw the girl trying to get up and a lot of blood.”

Several people went to help the girl and an ambulance was called. Lewis was taken to a local hospital and a helicopter was called to take her to a trauma center, but she died before the helicopter arrived, police said.

3. The Gun’s Owner Left the Gun in His Truck for Webb to Look At

Sheriff deputies back at the scene right now where they are collecting a casing. pic.twitter.com/1ObLknwqEl

Police told the Hickory Record that the seller of the rifle, who has not been identified, left the rifle in the back of his truck so Webb could come and look at it. The gun’s owner was not home at the time.

The rifle is a green and black Ruger .22 caliber, police said.

4. Lewis Was Going to be Entering Her Junior Year of High School in the Fall

Lewis would have been a junior in high school this fall. (Facebook)

Lewis was going to be entering her junior year of high school this fall.

“She was just an awesome kid,” her brother, Brent Lewis, told WIS-TV. “She loved everyone.”

5. No Charges Have Been Filed Against Webb or Lewis

Charges had not been filed as of Monday afternoon and the sheriff’s office said it was investigating the case and will turn over a report to the District Attorney’s office.

Lynch posted on Facebook after the shooting, “Can’t explain the pain I’m feeling inside. I’m dead inside.”

According to Lynch’s Facebook page, he was Lewis’ boyfriend and was friends with Webb. Police said Lewis had just met Webb. 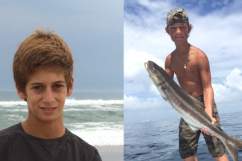 Loading more stories
wpDiscuz
19
0
Would love your thoughts, please comment.x
()
x
| Reply
Selena Lewis, 16, was accidentally shot and killed while taking a photo of her boyfriend's friend in North Carolina.