Senator Robert Menendez (D-N.J.) juxtaposed with a photo of Cecil the lion. (Getty/Twitter)

Senator Robert Menendez, a Democrat from New Jersey, has proposed a new law to Congress to ban people from bringing trophy animals they shot abroad back to the United States. According to a draft of the bill released July 31 by Menendez, the bill will seek to extend the import- and
export-related provision of the Endangered Species Act of 1973.

“Let’s not be cowardly lions when it comes to trophy killings… Cecil’s death was a preventable tragedy that highlights the need to extend the protections of the Endangered Species Act. When we have enough concern about the future of a species to propose it for listing, we should not be killing it for sport. I’m proud to be joined by my colleagues in introducing this common-sense legislation to take a necessary and prudent step that creates a disincentive for these senseless trophy killings and advances our commitment in leading the fight to combat global wildlife trafficking.”

The bill will be called Conserving Ecosystems by Ceasing the Importation of Large (CECIL) Animal Trophies Act and will “curb the sport killing of species that are proposed to be listed as threatened or endangered under the Endangered Species Act of 1973.”

A full transcript of the bill reads:

To amend the Endangered Species Act of 1973 to extend
the import- and export-related provision of that Act to
species proposed for listing as threatened or endangered
under that Act.
1 Be it enacted by the Senate and House of Representa-
2 tives of the United States of America in Congress assembled,
3 SECTION 1. SHORT TITLE.
4 This Act may be cited as the ‘‘Conserving Ecosystems
5 by Ceasing the Importation of Large (CECIL) Animal
6 Trophies Act’’.
2
WEI15909 S.L.C.
1 SEC. 2. AMENDMENT TO ENDANGERED SPECIES ACT OF
2 1973.
3 Section 9(a)(1) of the Endangered Species Act of
4 1973 (16 U.S.C. 1538(a)(1)) is amended by striking sub-
5 paragraph (A) and inserting the following:
6 ‘‘(A) for any such species listed, or proposed to
7 be listed, under section 4, import the species into, or
8 export the species from, the United States;’’.

Cecil the lion was killed in early July by Minneapolis-area dentist Walter Palmer during an illegal hunt. On July 31, Zimbabwean authorities said they will try to extradite Palmer to face criminal charges:

“From investigations carried out so far it shows that the whole poaching event was properly orchestrated and well financed to make sure that it succeeds. The professional hunter, client and land owner were therefore all engaged in poaching of the lion,” the Zimbabwe National Parks agency said in a statement. “Unfortunately it was too late to apprehend the foreign poacher as he had already absconded to his country of origin. We are appealing to the responsible authorities for his extradition to Zimbabwe so that he be made accountable for his illegal actions.” 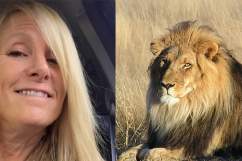 Animal Psychic Claims to Have Cecil the Lion’s Last Words

Loading more stories
wpDiscuz
34
0
Would love your thoughts, please comment.x
()
x
| Reply
Senator Robert Menendez of New Jersey has proposed a new law to Congress to ban people from bringing trophy animals they shot abroad back to the United States.