In response to the tragedy, the sick church members from Kansas tweeted “Picket Funerals.” The first tweet came in response to an Associated Press message which quoted an official calling the tragedy an “act of domestic terrorism.” Subsequently, the group has said it’s calling their presence at the funerals a “Protest” and it will be done with a “faithful message.” That message was accompanied with this video: 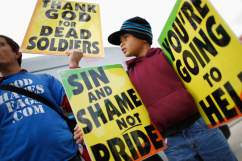 The second tweet announced that it was “Picket time!” upon the identification of one of the victims, USMC Gunnery Sgt. Thomas Sullivan. The other men killed in the attack have been named as Carson Holmquist, 25, Squire “Skip Wells, 21, David Wyatt, 27, and Randall Smith, 26.

Before the face of sun we roundly proclaim God's Word! God Hates This Generation of proud evil doers! #Chattanooga pic.twitter.com/oTF6zCbomz

Later, Westboro began responding to those who threatened the group’s members if they come to Chattanooga, calling one person a “Silly girl!” They then began talking about how the shooting was “Divine Terrorism” and that “God Sent the Shooter.”

The “church,” which has made its name in protesting the funerals of fallen soldiers and victims of tragedies — somehow relating the deaths to acceptance of homosexuality in society — has proven time and again that no tragedy is safe from the group’s vile opinions.