(Gregory Peck & Brock Peters in To Kill A Mockingbird / Imgur)

Harper Lee’s Go Set a Watchman, sequel to 1960 literary classic To Kill A Mockingbird, came out today. Eager readers are wondering about the rumor that Atticus Finch, revered in her first book as a bastion of human civility, is now portrayed as a bigot.

According to a New York Times article about the new release:

Atticus is a racist who once attended a Klan meeting, who says things like “The Negroes down here are still in their childhood as a people.” Or asks his daughter: “Do you want Negroes by the carload in our schools and churches and theaters? Do you want them in our world?”

This provides a stark contrast to how his children, Scout and Jem, viewed Atticus in To Kill A Mockingbird. In that book, Atticus said such things as:

“You never really understand a person until you consider things from his point of view … until you climb into his skin and walk around in it.”

“The one thing that doesn’t abide by majority rule is a person’s conscience.”

So why is beloved literary hero portrayed this way in Lee’s newest and presumably last novel?

USA TODAY’s 2 (out of 4)-star review said, “If you think of Watchman as a young writer’s laboratory, it provides valuable insight into the generous, complex mind of one of America’s most important authors.”

The second answer is because the major theme of Go Set a Watchman is “disillusionment.” The New York Times concludes:

In “Mockingbird,” Atticus was a role model for his children, Scout and Jem — their North Star, their hero, the most potent moral force in their lives. In “Watchman,” he becomes the source of grievous pain and disillusionment for the 26-year-old Scout (or Jean Louise, as she’s now known). 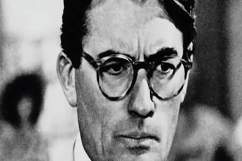 What Does ‘Go Set a Watchman’ Mean?

Read More
Books, Civil Rights
wpDiscuz
2
0
Would love your thoughts, please comment.x
()
x
| Reply
Harper Lee's "Go Set a Watchman", sequel to "To Kill A Mockingbird", came out today. Eager readers are wondering about the rumor that Atticus Finch is now a bigot.