Thai police have released a detailed electronic sketch of the man they believe left a bomb that killed 22 people at the Erawan Hindu shrine on Monday. They are offering a $28,000 reward for information leading to his capture.

Yesterday Thai police released CCTV footage of a man they say perpetrated the terrorist attack. Above is the footage of that man, who appears dressed in a yellow shirt with a backpack. He then leaves the backpack at the Erawan shrine. Sky News reports that the bomb, which detonated in what could most easily be described as “Bangkok’s Times Square,” was a car bomb.

The man’s ethnicity is not clearly visible in the video and originally Thai authorities say that he could either be a domestic or foreign terrorist. However, they now believe he is foreign per the arrest warrant issued by Bangkok’s Southern Criminal Court. BBC reports:

Although the main suspect in the footage has not been identified, an arrest warrant for him has been issued by Bangkok’s Southern Criminal Court. It accuses an “unnamed foreigner” of conspiracy to commit “premeditated murder” and weapons offences.

Bangkok authorities also said he may have accomplices. “We are also looking for other suspects in connection with the blast,” said national police spokesman Prawut Thawornsiri. “These types of attacks are not usually planned by one person alone.”

Yesterday Thai chat forums were abuzz over the photos of a young, Caucasian man with burn marks who appeared to be in police custody with an allegedly fake, American passport. Some claimed he was the Bangkok Bomber. No further news about this man has been reported, however.

Australian actor Sunny Burns had also been questioned by Thai police. According to News.com Australia, “Burns claims to have handed himself in after an image comparing him to the suspect began to circulate online.” He has since been released. 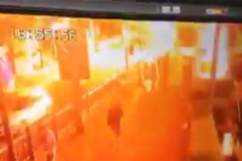 Loading more stories
wpDiscuz
2
0
Would love your thoughts, please comment.x
()
x
| Reply
Thai police have released a detailed electronic sketch of the man they believe left a bomb that killed 22 people at the Erawan Hindu shrine on Monday.