An undocumented immigrant is accused of murdering his aunt, her pregnant daughter, and her boyfriend, in Florida on August 11. The suspect is 19-year-old Belize national Brian Omar Hyde. The victims have been named as his aunt, Dorla Pitts, 37, his cousin, Starlette Pitts, 17, and her boyfriend, Michael Kelly Jr., 19. The incident occurred in the small town of Lehigh Acres, close to Fort Myers.

Lehigh Acres triple murder suspect: Who is Brian Hyde?Authorities in Brian Hyde's native country of Belize say he is no stranger to them.2015-08-13T22:54:46.000Z

A Lee County Sheriff’s Office statement said that all of the victims were killed by “repeated, sharp force trauma.” Investigators believe that Dorla Pitts stumbled in as the killings were taking place. Her husband said that he was on the phone with his wife when he heard her say “Brian! What happened here!” The line then went dead. An 18-month-old child was found alive in the home.

2. Hyde Was First Arrested for Driving on the Wrong Side of the Road

LCSO: News conference at 4 today for a major development regarding Tuesday’s homicide in Lehigh Acres. pic.twitter.com/oU6UVcXDh8

Sheriff’s deputies caught up with Hyde as they were still processing the murder scene in Lehigh Acres. The Lee County statement said that Hyde was pulled over for driving on the wrong side of the road. The car he was in was a white Range Rover that was registered to Dorla Pitts’ home. Officers noticed blood on Hyde’s pants and took him into custody. A bloody palm print left at the scene in Lehigh Acres led investigators to charge the 19-year-old with murder.

3. Despite Being Wanted in Belize, Hyde Entered the United States 7 Months Ago

WINK News reports that Hyde entered the U.S. illegally through the Texas border in January 2015. Since then, he had been living with his aunt in Fort Myers. NBC 2 reports that he was a wanted man in Belize, accused of robbing a cell phone store (a case where he apparently could have faced a murder charge), handling stolen goods as well as assaulting a cop in November 2014. Hyde is now facing three charges of 2nd degree murder as well as one count of murdering an unborn child. He’s being held without bond in a Lee County jail. If convicted on all charges, he will face life in prison.

4. His Uncle Is One of Belize’s Most Famous Criminals

5. There Are Around 3 Million Undocumented Immigrants in the U.S. From Central America

The U.S. Census Bureau says there are just under 55,000 documented Belizeans in the United States, compared against just 10,000 in 1990. Rapper Shyne is among the country’s diaspora in the U.S. The bureau adds that there are believed to be around 3 million undocumented Central Americans in the U.S., mainly from Costa Rica and Honduras. Belize has a relatively small population of just over 300,000. 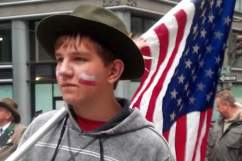 Read More
5 Fast Facts, Breaking News, Crime, Florida
An undocumented immigrant is accused of murdering his aunt, her pregnant daughter, and her boyfriend, in Florida.