Megyn Kelly asked Donald Trump about his history of making negative comments towards women, like calling them a “fat pig.” You watch the interaction above.

“For the record, it was well beyond Rosie O’Donnell,” Kelly responded.

In it, Trump centered on O’Donnell and she tweeted back.

try explaining that 2 ur kids 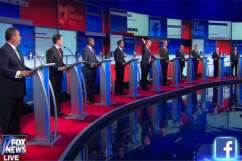 WATCH: Donald Trump Will Not Pledge Allegiance to GOP