Reddit user VirulentWalrus shared this photo during a discussion of the Dota 2 championships. (Reddit/VirulentWalrus)

For the first time, a United States team took home first place in the Dota 2 international pro-gaming competition. The International 2015, an international esports competition for the game Dota 2, was won by a team called the Evil Geniuses, as they bested the “dark horse” of the competition in the final round. The total prize pool was more than $18 million, which consists of a base contributed by Valve Corporation and sales of an annual interactive tournament booklet, Mashable reported. Dota 2 is a multiplayer online battle arena game, known as MOBA, that puts teams of 5 in competition.

Here are the photos and videos you need to see.

1. This Is the First Time a U.S. Team Won the Dota 2 International Championship 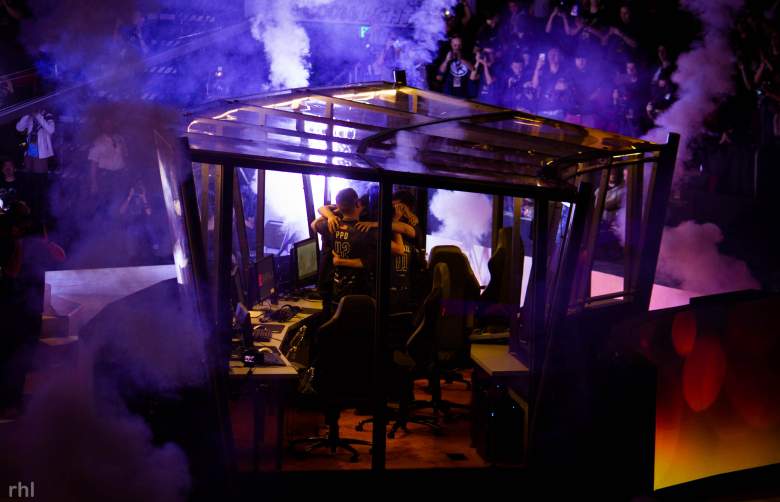 The team of five gamers, called Evil Geniuses, walked away with a $6.6 million prize. In the image above, shared by Reddit user angrycommie, the Evil Geniuses team hug after their amazing win. The total prize pool was $18 million, Mashable reported. Second place went to CDEC, which got into the competition through qualifying competitions rather than scoring an official invitation. The team that won last year, Newbee, was the first team out of this year’s international competition.

The International happens because of you.Thanks for supporting your teams and their dreams to be the best. #TI5 pic.twitter.com/Pm0JzGgtdq

Dota 2 also shared this image of the winning team:

2. This 6-Million-Dollar Dunk Has Everyone Excited

The moment Evil Geniuses sealed the win is caught in the YouTube video posted above by Dota2Storm. For nitpickers out there, the video could technically be called the 4-Million-Dollar Slam, when considering the difference between the first and second prize. Here’s a shot of the draft for this final competition:

3. You Can Watch All Four Matches Online

All four matches in T15 can be watched on YouTube at the following links: Game 1, Game 2, and Game 3. Game 4, which is CDEC vs EG, is linked in the video above.

4. The Deadmau5 Concert is Much Better If You See It The Way It Was Meant To Be Seen

Many people are complaining about the Deadmau5 concert. But a thread on Reddit revealed that the concert was actually streamed poorly because it didn’t show all the moments during the game and the special zooms and pans that people attending the concert were able to see. The YouTube video linked above, from Reddit user thecitizenx, gives a better idea of what actually happened.

5. The Money Stacks Up Quite Well Against Other Competitions

With our #TI5 win, Evil Geniuses places #1 in highest overall earnings of any esports team in history. #BleedBlue pic.twitter.com/F9P0PCH9ov

Since the competition ended, many fans and players have been sharing details about how the prize winnings stack up against other competitions. Evil Geniuses has won more in overall earnings than any other esports team in history, as shown in the Twitter post above. In addition, the $6.6 million win is higher than Wimbledon or The Masters wins and just about $1 million less than the winner of The World Series of Poker gets, according to Darren Rovell:

A bunch of gamers called the Evil Geniuses just won $6.6M for winning at Dota 2. Here's how that stacks up pic.twitter.com/VNpkkK30ji

The prize winnings will be split among the Evil Geniuses team. Forbes reported that one of the winners, 16-year-old Sumail, had grown up in Pakistan and once sold his bike to be able to afford to play Dota 2.

Loading more stories
wpDiscuz
2
0
Would love your thoughts, please comment.x
()
x
| Reply
The U.S. team Evil Geniuses won the Dota 2 international championship. These are the photos and videos that you can't miss.