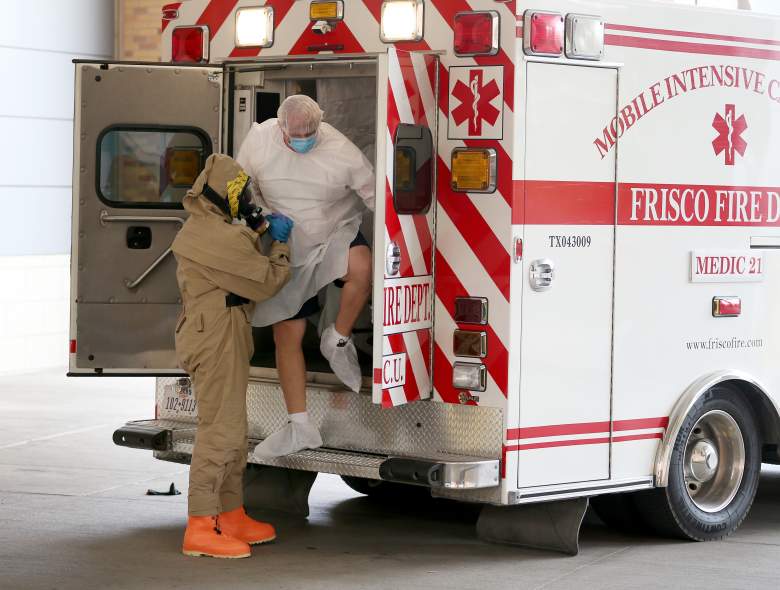 8 patients are being held in quarantined or being monitored at the University of Alabama-Birmingham Hospital after coming into contact with a patient exhibiting Ebola-like symptoms. Even though the patient is being considered “at low risk” of having the disease, multiple public health agencies are mobilizing to avoid possible spreading of the disease.

“We had a situation today in which somebody who had recently traveled to a country where there are still some active cases of Ebola had been returned to the U.S.,” Jefferson County Medical Director Edward Khan said. “This person would fit into our low-risk category, meaning they did not come into contact with any known Ebola cases while over there, and they didn’t participate in any high-risk activities such as burial ceremonies or health care work.”

2 family members of the original patient is being asked to stay in their homes while 4 emergency responders are under quarantine overnight at a “secure facility inside the (Birmingham) city limits” for monitoring. The area around the original patient’s home is closed to traffic.

There Has Been No Confirmed Cases of Ebola in Alabama

Alabama last reported a possible Ebola contamination last June when a patient at Children’s of Alabama displayed symptoms of Ebola. After consultation with the Center for disease Control and Prevention and the Alabama Department of Health, it was determined that the patient did not meet the criteria for Ebola.

Despite this close call, there has been no diagnosed cases of Ebola in Alabama or in any part of the American South, with the exception of Texas.

Ebola Cases are on the Decline Worldwide 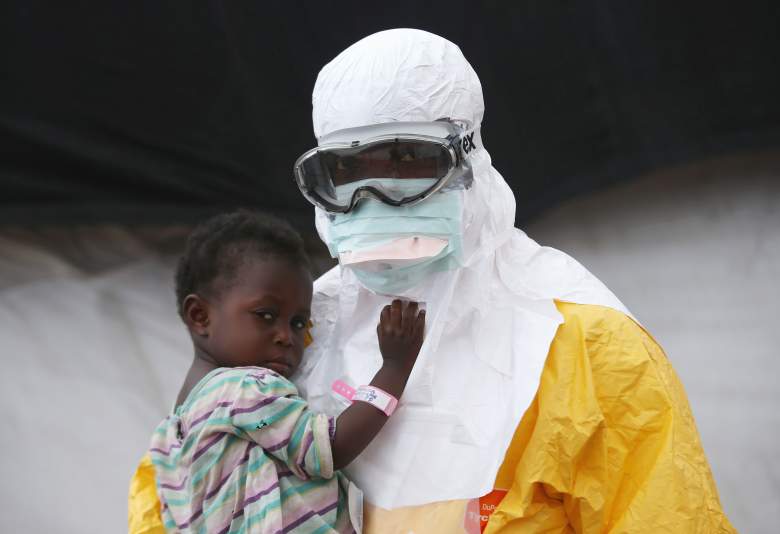 A Doctors Without Borders (MSF), health worker in protective clothing holds a child suspected of having Ebola in the MSF treatment center on October 5, 2014 in Paynesville, Liberia. The girl and her mother, showing symptoms of the deadly disease, were awaiting test results for the virus. The Ebola epidemic has killed more than 3,400 people in West Africa, according to the World Health Organization. (Getty Images)

According to the World Health Organization, the number of new cases of Ebola Hemorrhagic Fever in Sierra Leone and Guinea has dropped to its lowest level in a year, with only one new report in each country. There are no new reports in Liberia.

“That progress is real,” said Dr. Bruce Aylward, an assistant director general for WHO. He believes that the 2014 Ebola Epidemic could be quelled completely by the end of 2015.

The Ebola Hemorrhagic Fever is a disease contracted by primates and humans through direct contact with body fluids of an infected body. Symptoms — including fever, sore throat, muscular pain and headaches — typically manifest between 2 days and 3 weeks after contracting the Ebola virus . This is followed by vomiting, rashes and diarrhea, with the possibility of internal and external bleeding. 25 to 90 percent of everyone infected by the disease dies from hypovolemic shock — or low blood pressure due to extreme fluid loss — within 6 to 16 days of symptoms appearing. 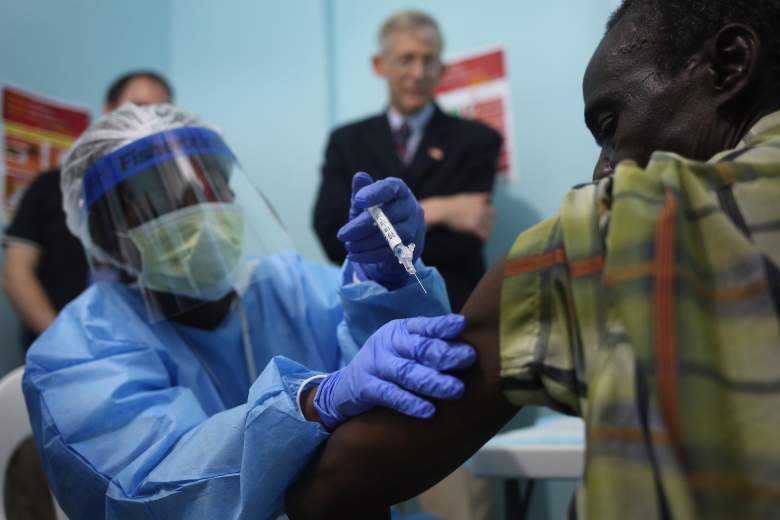 A nurse administers an injection on the first day of the Ebola vaccine study being conducted at Redemption Hospital, formerly an Ebola holding center, on February 2, 2015 in Monrovia, Liberia. Twelve people were given injections Monday, out of a planned 27,000 people in the Monrovia area. The clinical research study is being conducted jointly by the U.S. National Institutes of Health (NIH), and the Liberian Ministry of Health. The Ebola epidemic virus has killed at least 3,700 people in Liberia alone, the most of any country, and nearly 9,000 across in West Africa. In background of photo is Dr. Clifford Lane, Clinical Director of the U.S. National Institute for Allergy and Infectious Diseases. (Getty Images)

The Ebola Hemorrhagic Fever (also called the Ebola Virus Disease) is one of the most destructive diseases in history, killing more than 11,000 since the beginning of the 2014 epidemic in late 2013. In July, 2015, the medical journal Lancet published a paper suggesting that the results of a trial of an Ebola vaccine showed 100 percent effectiveness.

With this vaccine being the first Ebola vaccination to clear clinical trials, there was high hopes for this medication. However, with the epidemic calming down, there are fewer opportunities to find community clusters to test the vaccine. There is, however, hope that the trials can continue as planned in order to secure FDA approval of the vaccine for Americans visiting infected areas.

The 2014 Ebola Epidemic was the Largest Such Epidemic in History 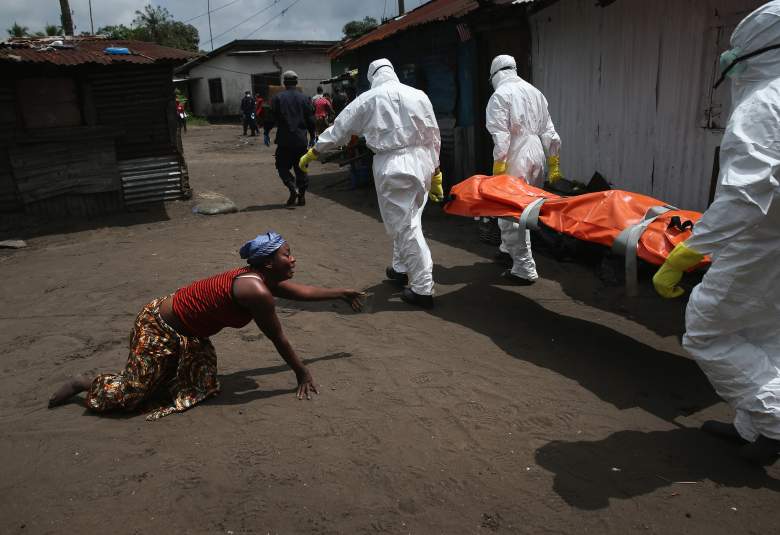 A woman crawls towards the body of her sister as Ebola burial team members take her sister Mekie Nagbe, 28, for cremation on October 10, 2014 in Monrovia, Liberia. Nagbe, a market vendor, collapsed and died outside her home earlier in the morning while leaving to walk to a treatment center, according to her relatives. The burial of loved ones is important in Liberian culture, making the removal of infected bodies for cremation all the more traumatic for surviving family members. The World Health Organization says the Ebola epidemic has now killed more than 4,000 people in West Africa. (Getty Images)

The 2014 Ebola Epidemic has resulted in 27,872 reported cases of Ebola hemorrhagic Fever, resulting in 11,295 deaths as of July 28, 2015. This makes the current Ebola epidemic the largest and most deadly Ebola epidemic in history. Between 1976 and 2013, the World Health Organization reported 1,716 cases of Ebola infection.

According to WHO statistics, 70.8 percent of all patients that contracted Ebola without receiving hospitalization died from the infection, while 57 to 59 percent of hospitalized patients died. The largest concentrations of infections occurred in Liberia (10,672 cases), Sierra Leone (13,379 cases) and Guinea (3,785 cases). 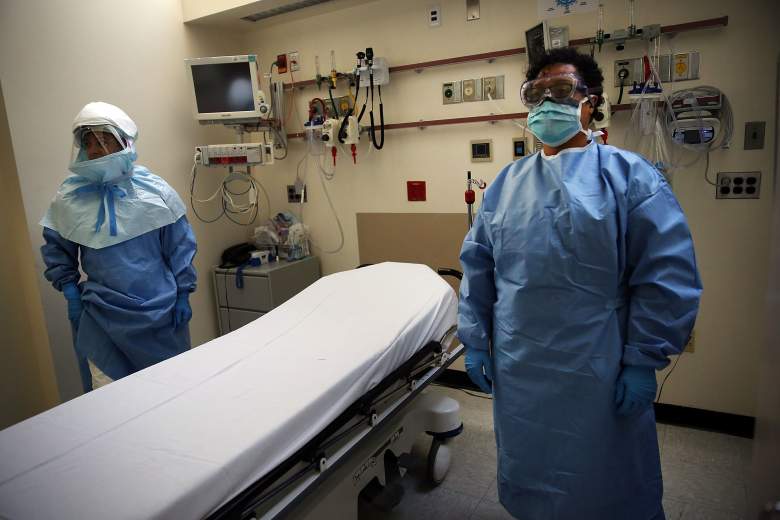 Members of Bellevue Hospital staff wear protective clothing as they demonstrate how they would receive a suspected Ebola patient on October 8, 2014 in New York City. If the patient was confirmed to be carrying the deadly virus the person would be sent to an isolation unit for treatment. The first person diagnosed with Ebola in the United States, Liberian Thomas Duncan, has died at a Dallas hospital, Texas Health Presbyterian Hospital said. (Getty Images)

The United States saw 4 confirmed cases of Ebola in the current epidemic, with 1 death. The first case, as reported by the Centers for Disease Control and Prevention, occurred on September 30, 2014 when a man traveled from Liberia to Dallas. The only Ebola fatality to occur in this country for this epidemic, the man died at the Texas Presbyterian Hospital of Dallas. The patient passed the virus to two healthcare worker who were caring for him, making the workers the second and third confirmed Ebola cases on October 10 and 15, 2014, respectively. Both patients recovered 2 weeks following contraction.

Loading more stories
wpDiscuz
5
0
Would love your thoughts, please comment.x
()
x
| Reply
On the evening of August 4, the University of Alabama-Birmingham Hospital reported a possible Ebola case. There haves been only 4 confirmed Ebola cases in the U.S.