Video from Ferguson, Missouri, showed the chaos after shots were fired during an officer-involved shooting Sunday night on the one-year anniversary of Michael Brown’s death.

A video posted from RT’s live stream (watch it above) shows shots being fired outside the Ferguson Market on West Florissant Avenue.

Moments after that shootout, police said they shot and wounded a person who was involved. He was identified as Tyrone Harris Jr., 18, and is in critical condition.

The Associated Press also posted raw video from the scene:

A local protester, Tony Rice, who goes by @Search4Swag on Twitter, posted videos of police standing over a bloodied victim:

I was just been released…cuffed and detain for not…leaving the scene…no one was really sure.

St. Louis County Police confirmed that an officer was involved in the shooting. Read more about the protests and shooting at the link below: 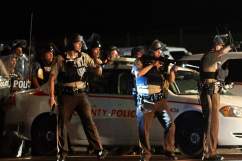 Man Shot by Police in Ferguson During Protests: 5 Fast Facts You Need to Know

Loading more stories
wpDiscuz
0
0
Would love your thoughts, please comment.x
()
x
| Reply
Police officers were involved in a shooting in Ferguson, Missouri, during protests on the anniversary of Mcike Brown's death. Watch video from the scene here.