The suspect being taken into custody. (Twitter/@TrevorPounds)

The student who is allegedly responsible for the lockdown at Mississippi State University has been named. Sources at the school have named the suspect as freshman Fhu-Qui Cong ‘Bill’ Nguyen, 20. At around 10:20 a.m. local time on August 27, officials at MSU issued a campus wide alert regarding a gunman on campus, a lockdown ensued until Nguyen was arrested nearly an hour later.

Photo of suspect in custody: pic.twitter.com/dBOVPBZbfN

Nguyen is in custody. He was was arrested at McCool Hall, MSU’s business school, according to MSU’s Athletic Director Scott Stricklin. The Clarion-Ledger’s Therese Apel tweeted that the situation was caused by a suicidal student. He was also described as being “homicidal.” The Madison County Journal reports that Nguyen is believed by police to have been unarmed and that no charges have been filed yet. He’s a native of Madison, Mississippi. WREG reports that Nguyen had started the day by making threatening phone calls to an office in Jackson, Mississippi. His identity was confirmed by MSU President Mark Keenum. The Daily Journal reports that Nguyen will be charged with disorderly conduct and undergo a psychological evaluation.

2. The Lockdown Caused Panic at the School, Even After it Was Lifted

Prayers for you Fhu-Qui (Bill) Nguyen. The Lord only knows what you're going through. Christ loves you. pic.twitter.com/2BdmVy8bFF

Despite the apprehension, students and staff remained on lockdown for another hour. The school’s newspaper The Reflector, told students to “Continue to exercise caution on campus and stay where you are.” The school continued to be searched by local police with the Lowndes SWAT team being deployed in a support role into the afternoon. Classes were suspended until 2 p.m. WCBI News reported, quoting a school source, that there was no truth to the online chatter about a second shooter. A graduate student at the school, Pranaav Jadhav, tweeted that those rumors may have been caused by a car tyre screeching. Therese Apel later reported that she spoke to the parent of a student, that student said that “somebody screamed on the drill field causing everyone to run.”

3. No Shots Were Fired at the School

Craziness… Never thought this would happen

WCBI News reports that there are no injuries thought at this time. OCH Regional Medical Center, the closest hospital to the school, further confirmed this by saying they have not received any patients from this school recently. MSU’s Twitter account said that no shots were fired at the school.

The full name for MSU is the Mississippi State University of Agriculture and Applied Science. It’s located in Starkville, Mississsipi and has a student body of over 20,000 people. Starkville is known as “Mississippi’s College Town.” Lee Hall, where the gunman, was said to be, is the original University building but is now used by the languages department, including the English department. Celebrated author John Grisham was once a student there.

5. MSU Students Are Paying Tribute to the Local Police

Everyone should be complimenting and praising the swift and precise response from MSU Police & Authorities. Kept everyone safe & calm.

Residents of the area and students of Mississippi State University are hailing the local police as heroes following the lockdown.

Mississippi State handled that about as well as you possible can. Kept people informed/ issued alerts/ apprehended the suspect. Well done.

Hats off to campus and local law enforcement for rushing into an uncertain and possibly deadly situation to keep students and faculty safe.

S/O to our Police Department on campus. Thank Yall for everything. Love Yall right now. 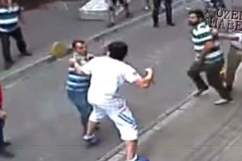 Read More
5 Fast Facts, Breaking News, Crime
The student who is allegedly responsible for the lockdown at Mississippi State University has been named.