Kasich, who heads the state that will be the debate’s host and who was on the bubble for selection, told Fox News, “As governor, I am glad to welcome my fellow debate participants to our great state and I look forward to discussing the issues facing our country with them on Thursday.”

1. Fox News’ & the RNC’s Plan to Keep the ‘Wildcards’ Out Failed 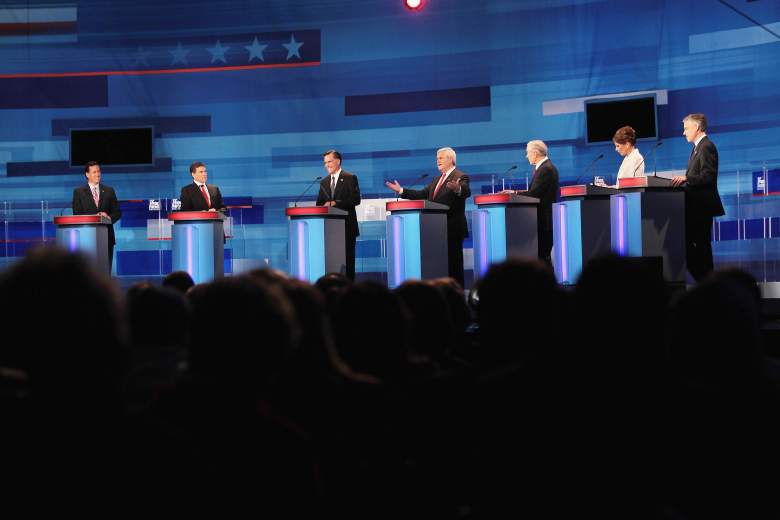 During the 2011-2012 primary season, veers toward patronizing oneself toward the conservative base — such as the self-deportation argument for illegal immigrants — in order to win the primaries made then-Republican nominee Mitt Romney unpalatable for Latinos, moderates and independents. The Republican National Committee saw this as dooming the Republicans’ chance to unseat President Obama and intended to avoid making the same mistake in 2016. The idea Fox News came up with — with the RNC’s blessing — was to limit the debate to candidates that already had a strong following. The thinking behind this was that the only candidates that would have such a following early in the campaign would be those that are moderates and who would campaign on the platforms most of the party support.

This was ruined by the party having a large class of candidates — which lowered the amount of support needed to be on the top of the polls — and by Donald Trump, who was already a celebrity and had a built-in cache of support. Despite the RNC’s best intentions, the fringe will be represented by Trump, Huckabee, Cruz and Carson — who have all made controversial statements and are all favored in the conservative community. It is unclear if the “likely potential candidates” — Bush, Walker and Kasich — can avoid being forced to veer to the far right in response to them. 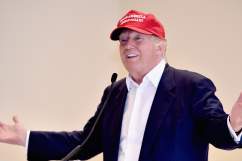 2. It Is Unclear What to Expect With the ‘Undercard’

I look forward to being @FoxNews 5pm debate for what will be a serious exchange of ideas & positive solutions to get America back on track.

While it is clear that the 2-hours prime-time debate on August 6 will likely follow the format and style of other Republican debates, no one is quite sure what to make of the one-hour 5pm forum for the candidates that did not make the cut for the main show. With many of the more extreme candidates appearing in the “undercard,” it is possible that the sense of having nothing to lose will turn the event into a screaming match over the most fringe ideologies of the party.

It is also completely possible that the events of the earlier forum may directly influence the questions and responses of the main event.

Fox News used the average of the five most recent national polls from Bloomberg, CBS News, Fox News, Monmouth University and Quinnipac University. These five polls, however, are not the five most recently releases polls from all reputable sources — a NBC News/Wall Street Journal poll was not included in Fox News’ calculations. Excluding the NBC News poll and including the Quinnipac poll (the 6th most recent poll) meant that Kasich was included in the top ten and Perry was not, adding controversy to the debate. 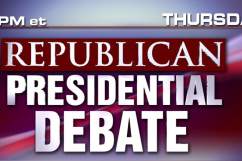 3. All Eyes Will Be on Trump, Huckabee & Carson 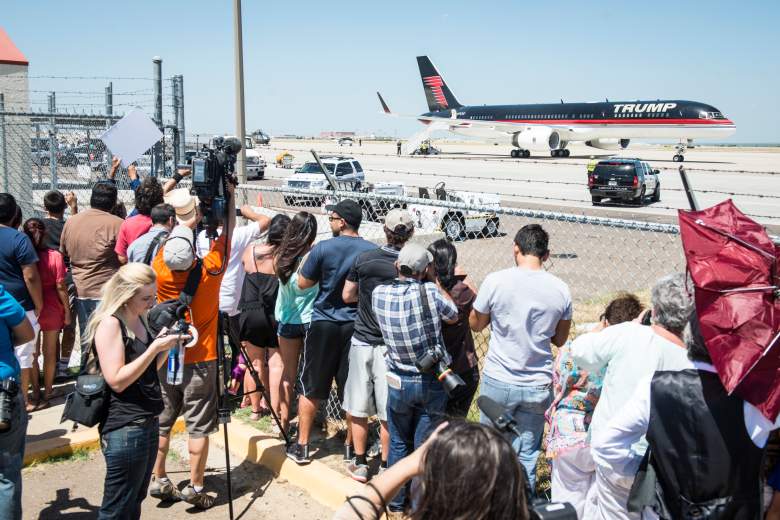 Citizens watch as Republican Presidential candidate and business mogul Donald Trump leaves in his plane after his trip to the border on July 23, 2015 in Laredo, Texas. Trump’s recent comments, calling some immigrants from Mexico as drug traffickers and rapists, have stirred up reactions on both sides of the aisle. Although fellow Republican presidential candidate Rick Perry has denounced Trump’s comments and his campaign in general, U.S. Senator from Texas Ted-Cruz has so far refused to bash his fellow Republican nominee. (Getty Images)

The August 4 debate represents the first face-to-face meeting of Trump, Bush and Walker. Trump has made a name for himself in recent days for attacking candidates he perceived as attacking him first, as seen with Trump’s release of current Sen. Lindsey Graham’s personal cellphone number. With Trump seemingly being gaff-proof — he has been able to survive calling Vietnam prisoner-of-war Sen. John McCain “not a hero,” called a lawyer that asked for a break to nurse her child “a horrible person” and described the majority of Mexican immigrants as rapists and murderers — there seems to be little fear for Trump to speak his mind on the dais August 6.

It may be that this lack of tact may be Trump’s undoing. “Muhammad Ali once professed that ‘it is hard to be humble when you are as great as I am,'” wrote Ed Lee, a debate coach. “The current fantastic polling results for Trump in the run-up to the first Republican Party debate may make it difficult for him to approach the event with any sense of humility and propriety.”

Many will be tuning in to see if Trump can show the decorum and modesty expected from someone seeking the highest office in the land. Likewise, all eyes will be on Cruz, Huckabee and Carson — whom all have made controversial remarks — to see how they respond under pressure. Failing this test may mean that a trip to the second debate in Simi Valley may not be in the cards. 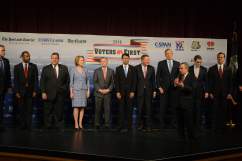 4. Christie’s Campaign Depends Solely on His Performance at the Debate 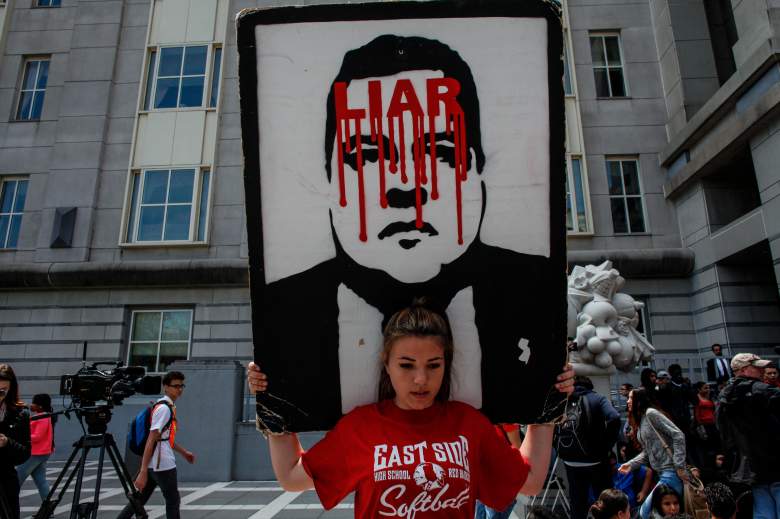 Four years later, Christie’s fortunes have collapsed. Highly unpopular at home, Christie’s involvement with the closure of the George Washington Bridge and alleged misuse of Hurricane Sandy relief funds have created a shadow of federal litigation, rumors of political dirty play and a general bad taste in the mouth of national Republican voters. Christie’s last hope for being president is to perform well in the debates and use the opportunity to reintroduce himself to the Republican base. This tactic helped Newt Gingrich to extend his faltering campaign in 2012.

“For him, every week is a big deal,” said Julian Zelizer, a professor of political history at Princeton University, about Christie. “If you slip and you’re still struggling to get attention, every opportunity matters. This is an opportunity to show people what his virtues are … and try to come away with being something other than that New Jersey guy involved with the bridge scandal. You want to give off the aura that you can win, that you’re a frontrunner.”

5. The Confusion & Headaches Experienced With This Debate Will Be Repeated Until the First Primary 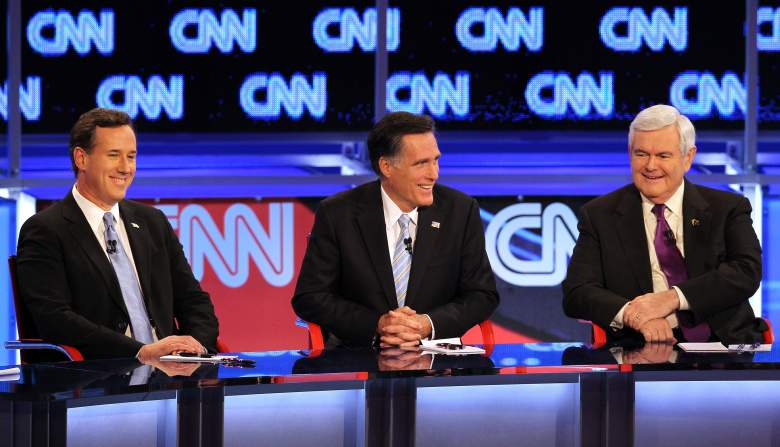 Republican presidential candidates (L-R) former U.S. Sen. Rick Santorum, former Massachusetts Gov. Mitt Romney and former Speaker of the House Newt Gingrich participate in a debate sponsored by CNN and the Republican Party of Arizona at the Mesa Arts Center February 22, 2012 in Mesa, Arizona. The debate is the last one scheduled before voters head to the polls in Michigan and Arizona’s primaries on February 28 and Super Tuesday on March 6. (Getty Images)

Despite the confusion involving the Fox News debate’s use of polling and the frustration the early voting states have expressed regarding the selection process taking emphasis away from them, the next debate — the CNN/Salem Radio debate on September 16 — will use a similar format for selecting the participants of its main debate.

There has been no recent news regarding CNN re-formatting the rules of its debate. 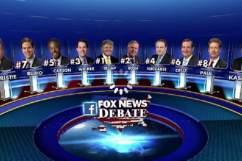 When Is The First Republican Presidential Debate 2015?