Lamar Davenport is accused of killing E’dena Hines, who was his girlfriend. (Facebook)

A 30-year-old man brutally stabbed Morgan Freeman’s step-granddaughter to death in a drug-fueled rage while screaming about exorcising her demons, police and witnesses say.

Lamar Davenport is accused of murder in the death of E’Dena Hines, who was his girlfriend, police said.

Hines, 33, was killed early Sunday morning outside her apartment in the Washington Heights neighborhood. Police charged Davenport with second-degree murder on Monday after he was taken to the hospital for a mental health evaluation, NBC New York reports.

Davenport was screaming “Get out devils! I cast you out Devils in the name of Jesus Christ! I cast you out!,” a witness told the New York Daily News.

1. He Was Found Standing Over Hines’ Lifeless Body After Stabbing Her Several Times, Police Say

Witnesses and police say Davenport was found over Hines body after stabbing her several times. The stabbing happened at about 3 a.m., NBC New York reports.

Davenport was in the midst of drug-induced psychosis when he attacked Hines, police sources told the New York Post.

The source told the newspaper Davenport, “was still making a stabbing motion with his arm, but he had nothing in his fist — the knife was jutting out of her chest.”

Hines was taken to Harlem Hospital, where she was pronounced dead. 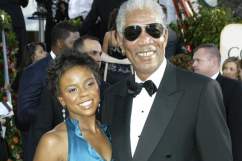 2. A Friend Says the Couple Was ‘Ecstatic’ Hours Before the Stabbing

Davenport and Hines in a photo from July. (Instagram)

A friend of Hines and Davenport, told The Daily Beast that the couple was “ecstatic” when he saw them just hours before the stabbing.

“I’m still trying to come to grips with what happened,” said Ray Rosario, who went to dinner with Hines, Davenport and other friends Saturday night. “I’m caught between the hate I have for him, my love for him being my brother, and my heart breaking for her.”

Rosario said Hines was never as happy as she seemed during the dinner.

3. Davenport Is an Actor & Aspiring Rapper Who Uses the Name Lyric

Davenport was an actor and rapper by the name of Lyric. He and Hines both attended New York University.

Police sources told the New York Post that Davenport had six prior arrests, including for marijuana possession and petit larceny, and was the father of two young children. Hines was not the mother of Davenport’s children, the Post reports.

4. Hines Had Recently Landed a Role in an Indie Movie & Was Living Her Dream

Hines with Freeman at the Golden Globes in 2005. (Getty)

Hines was the granddaughter of Freeman’s first wife, Jeannette Adair Bradshaw, to whom he was married to from 1967 to 1979.

“The world will never know her artistry and talent, and how much she had to offer,” Freeman said in a statement. “Her friends and family were fortunate enough to have known what she meant as a person. Her star will continue to shine bright in our hearts, thoughts and prayers. May she rest in peace.”

5. She Had Only Recently Moved Back to New York City

Hines recently moved back to New York City after spending some time living in Memphis because she said on her blog she wasn’t satisfied with how her acting career was going.

In a recent blog post,(watch it above) said her “dream” came true when she got a role in an independent film that began filming in July.

Hines wrote on her blog that she nearly gave up acting, moving to Memphis, Tennessee, because she felt unfulfilled. Then, in April, she audtioned for the role in Landing Up, and she got the part.