Michael Gabriel Paccard and Jacques Balmat became the first people to ascend the summit of Mont Blanc, the highest mountain in the Alps and one of the most sought-after climbs in the entire world. Now, 229 years after the pair reached the summit, unofficially sparking modern mountaineering, the accomplishment is being celebrated in the August 8 Google Doodle.

1. Frenchmen Michael Gabriel Paccard & Jacques Balmat Were the First to Reach the Top in 1786 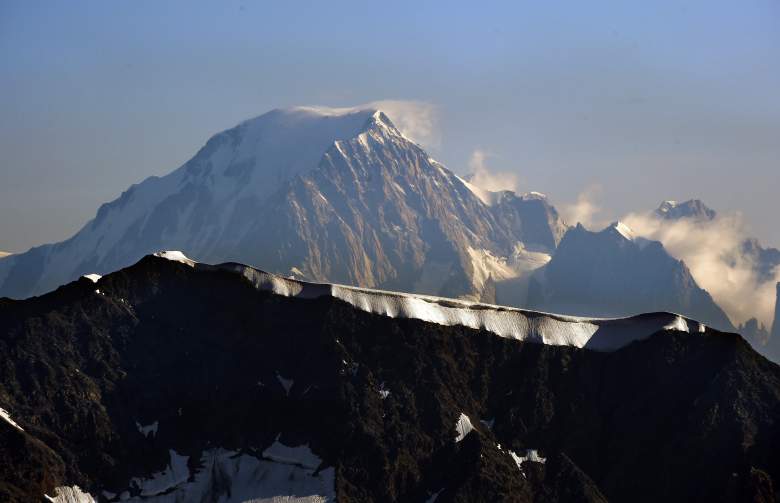 Nearly 20,000 climbers and tourists climb Mont Blanc annually and the area surrounding the mountain has become a major tourist area for both Italy and France. (Getty)

After hundreds of failed attempts by dozens of aspiring mountaineers, Frenchmen Michael Gabriel Paccard and Jacques Balmat made history when they became the first people to reach the summit of Mont Blanc, the highest mountain in the Alps. The mountain rises 15,711 feet above sea level and is ranked No. 11 in the world in topographic prominence. The pair, who lived in the town at the base of the mountain in Chamonix, ascended the summit on August 8, 1786, climbing the mountain from the Chamonix valley.

The accomplishment was, and still is, considered historic and a watershed moment in mountaineering. Eric Shipton, a British Himalayan mountaineer, described the feat, writing in his book Mountain Conquest:

Theirs was an astounding achievement of courage and determination, one of the greatest in the annals of mountaineering. It was accomplished by men who were not only on unexplored ground but on a route that all the guides believed to be impossible.

Now, the summit is ascended by an averaged of nearly 20,000 mountaineers and tourists every year. Since the early 21st century, administration of the mountain is shared between the towns of Courmayeur, in Italy, and Saint-Gervais-les-Bains, in France. 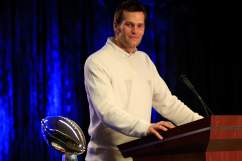 2. Horace Bénédict de Saussure Had Offered a Financial Reward to Anyone Who Could Complete the Ascent 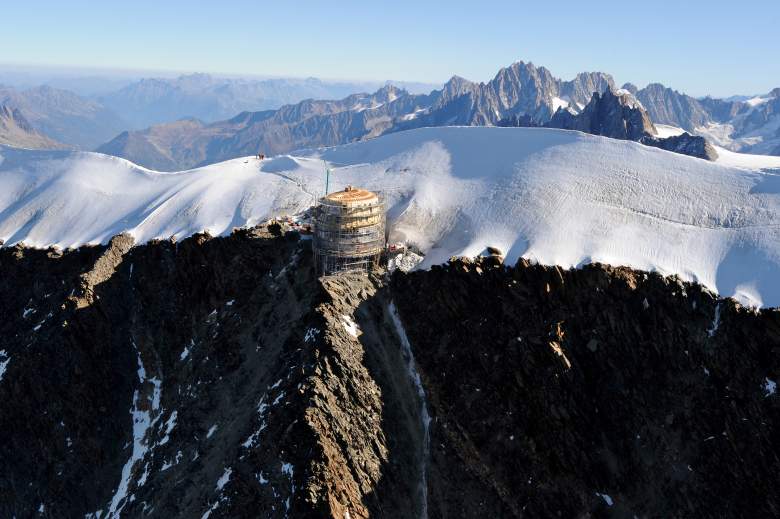 In 2011, construction began on “Refuge du Goûter” at the Dôme du Goûter on the way to the summit of Mont Blanc. The site is a breaking point for climbers moving up the mountain. (Getty)

In 1760, the Swiss aristocrat and physicist, considered by many to be the founder of alpinism, first visited Chamonix, offering a reward to the first man who could reach the summit of Mont Blanc. He had previously tried to scale the mountain himself, approaching on the Italian side, making two unsuccessful attempts between 1774 and 1785.

Saussure is featured as part of a large bronze statue (above), erected in 1887, with Balmat in Chamonix’s main square, prominently leaving Paccard out. The reason? The original ascent of Mont Blanc was grossly misreported immediately after it occurred after Marc-Theodore Bourrit, another Alpine traveler who had failed to find a route to the summit, downgraded the role Paccard played in the historic feat. 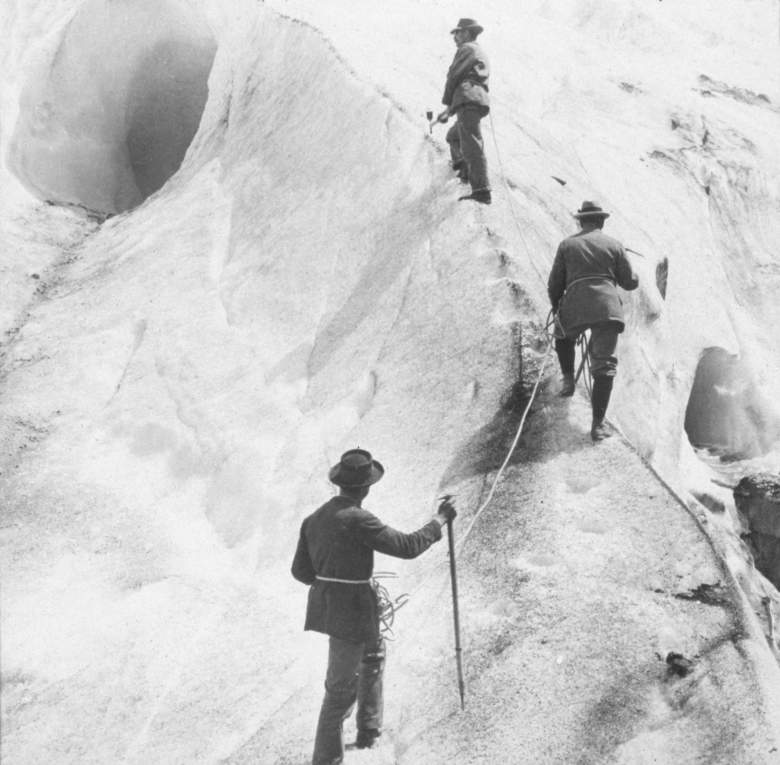 Paccard and Balmat are frequently credited with sparking modern mountaineering techniques after their successful ascent of Mont Blanc. (Getty)

Although their names are forever connected in the history books, Paccard and Balmat were joined away from the mountain and the texts when Paccard married his climbing partner’s sister.

Following their daring exploits on the mountain, the pair both settled into career paths that only occasionally included death-defying actions. Paccard, who practiced medicine prior to the Mont Blanc ascent, returned to his medical practice and also focused on an interest in botany and minerals.

Balmat, after collecting the reward money that Horace-Bénédict de Saussure had originally offered, returned to the mountain with his benefactor guiding the Swiss aristocrat on his own climb in 1787. He also published his own account of his climbs, Jacques Balmat or The First Ascent of Mont Blanc: A True Story, but was criticized for romanticizing the tales. Balmat died in 1834 when he fell off a cliff prospecting for gold in the Sixt valley. 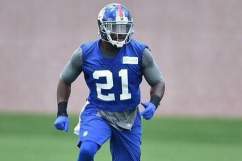 4. Marie Paradis Was the First Woman to Reach the Summit 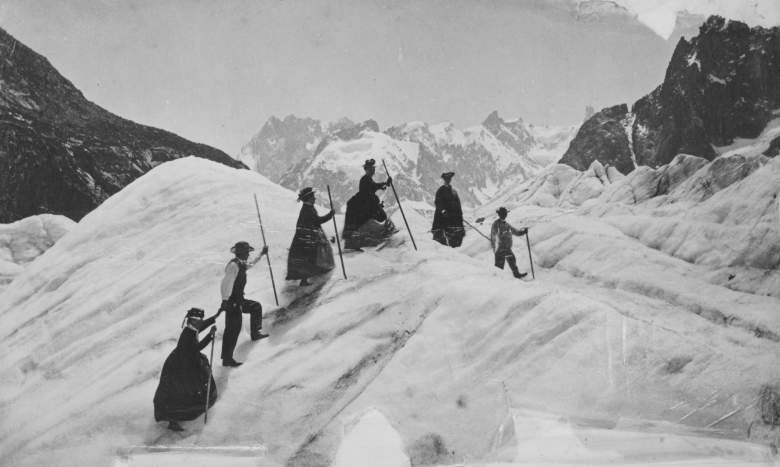 After her own successful climb, Paradis made it her mission to help other explorers who ventured up the mountain in the coming years, even leaving refreshments for them when they returned to the ground. (Getty)

Paradis, a former maidservant, etched her own name in the history books in 1808 when she became the first woman to climb Mont Blanc, joined by guide Jacques Balmat.

It was not an easy ascent for Paradis who was in such poor condition by the time the climbing party reached the summit that she actually had difficulty speaking and, reportedly, could not see the view from the peak. Still, Paradis looked every part the mountaineer in a self-designed outfit that weighed just over 14 pounds. In 1809 she recorded her experience on the mountain in a “graphic and picturesque” account in Le Bland.

After her daring exploits, Paradis was known as “Maria de Mont Blanc” and was heavily featured in Mark Twain’s novel A Tramp Abroad.

5. Mont Blanc Is Still Considered One of the Most Dangerous Climbs in the Alps

Mont Blanc is the tallest mountain in Europe but many climbers do not consider it, from a technical standpoint, the most difficult peak to climb. Some climbing companies even call the ascent a “long walk” and tout its ease of access for relatively in-experienced mountaineers.

Still, Mont Blanc is one of the most dangerous peaks in the entire world. In 2012, 11 people died in two separate incidents, just days apart, and, according to The Atlantic, there are over 100 hiker fatalities each year. In other words, more people have perished in the Mont Blanc range than in any decade of climbing in the Alaskan mountain ranges.

Why? What’s different? The biggest problem, it seems, is that Mont Blanc is too popular for its own good. Aidan Loehr, an American climbing guide explained it:

That ‘production line’ mentality tends to permeate to everyone else around those people. One person makes a bad decision and everyone else assumes it must be safe and follows. With Mont Blanc, there’s also the fact that so many thousands of people have managed to climb it that it kind of dumbs down the challenge, in many people’s minds. But the truth is, it’s a really big mountain, and most of the people who climb it don’t even know or understand what the dangers are.

In that same report by The Atlantic, the magazine counted 28 climbers caught in a July 12, 2012 avalanche and suggests that at any given time there are dozens of people on the mountain. That is an astounding number for any mountain and the toll those humans, and their feet, take on the environment of the peak opens them up to disaster.

Loading more stories
wpDiscuz
6
0
Would love your thoughts, please comment.x
()
x
| Reply
Lord Byron called it “the monarch of mountains," but in 1786 two Frenchman made history, ascending to the top of Mont Blanc, the tallest peak in the Alps.