A Honduran immigrant has become the first transgender person to work at the White House. This represents another great leap forward by the Obama administration regarding LGBT rights. According to multiple media reports, Raffi Freedman-Gurspan will work in the Office of Personnel having previously been employed by the National Center for Transgender Equality. There, she worked as a policy adviser.

1. Freedman-Gurspan ‘Reflects the Values of the Obama Administration’

Speaking to the Associated Press, White House senior adviser Valerie Jarrett said that Freedman-Gurspan “reflects the values of the Obama administration” in her pursuits of equality for the transgender community.

2. She Got Her Start Advocating for LGBT Rights in Massachusetts

According to her LinkedIn profile, Freedman-Gurspan studied at Boston University. Her first government jobs were win Massachusetts, working for the commonwealth and the city of Somerville. She’s a native of the town of Brookline. Since her graduation from the private liberal arts college St. Olaf’s, she has worked in various roles in LGBT advocacy. Arguably her most high-profile job during her early political career was as legislative director to HIV-positive legislative director to State Rep. Carl M. Sciortino, Jr. in Massachusetts. Only after his resignation from office in April 2014 did she move to D.C. to take a job with the National Center for Transgender Equality.

3. She’s Spoken Out Against Some of Obama’s Policies in the Past

She’s been at odds with the Obama administration in the past. As recently as June 2015, she was quoted by the Associated Press as playing down new laws regarding gay, lesbian, and transgender detainees who were also immigrants. She said at the time “This is all interesting on paper, to say the least, but we need to see how this actually plays out. We don’t think these folks should be in detention centers, period.” Immigration reform was listed as one of her duties at the National Center for Transgender Equality. Back in March 2014, USA Today quoted her as

She’s also been vocal about the pay-gap and unemployment that affects the transgender community. In an interview with Public Radio International in April 2015, Freedman-Gurspan praised the president saying “I would say that what we would encourage the president and like-minded individuals to always remember is that for transgender people, we are at the bottom of the economic ladder in many respects.”

4. She Was Adopted From Honduras & Raised by a Single Mother

5. She’s Not the First Transgender Trailblazer in D.C.

Aside from Freedman-Gurspan, other members of the transgender community have been involved in politics at the highest levels. In 2009, Dylan Orr, was appointed as a special assistant in the Labor Department’s Office of Disability Employment Policy, he later left to work for the city of Seattle. The Executive Director of the U.S. Army Office of Energy Initiatives, Amanda Simpson, was the first transgender woman to work at the Commerce Department. More recently, Shannon Price Minter, a transgender man, was appointed to the Commission on White House Felloships, according to the Advocate. 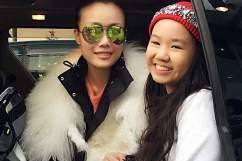