Republican presidential candidate Donald Trump was interviewed Friday night by former Alaska governor Sarah Palin on the show “On Point” on the One America News Network. Watch the video of the interview above.

The interview generated so much interest that One America News Network’s website crashed Friday night, according to Variety.com.

One America News, which is based in San Diego and launched in 2013, is available in about 12 million households across the United States. Palin has been serving as the guest host of “On Point.”

Palin also interviewed Republican candidates Jeb Bush, the former governor of Florida, and Texas Senator Ted Cruz on Friday night. You can watch those interviews below: 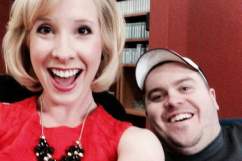