A 29-year-old man with a history of psychiatric issues was killed after unleashing pepper spray inside a Tennessee movie theater and attacking a man with a hatchet.

Nashville Police said Vincente David Montano was killed by police outside the Antioch theater. He was wearing a surgical mask to protect himself from the pepper spray and was armed with an Airsoft gun that looked like a real handgun. He also had a backpack strapped to his chest that had a fake bomb inside, police said.

The man attacked by the hatchet was treated for a minor injury. He was also treated for the effects of the pepper spray, along with a 17-year-old girl and a woman who were also sprayed, police said.

Here’s what you need to know about Montano:

1. He Had Been Committed to a Mental Hospital at Least 4 Times

He was diagnosed with paranoid schizophrenia, police said. 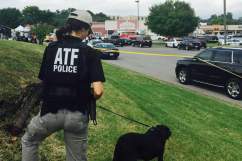 2. His Mother Reported Him Missing 2 Days Ago After Not Seeing Him Since 2013

Mother of Vincente Montano filed a missing persons report on 8/3/15, told officers she hadn't seen him since 2013 pic.twitter.com/CIDGaO1ImO

Montano’s mother, Denise Pruett, reported her son missing just two days before the incident at the theater. She said she had last seen him in 2013 and believed he was homeless. In the missing persons report, she said he was diagnosed with paranoid schizophrenia by a doctor in Murfreesboro, Tennesee, where they previously lived, in 2006.

Pruett said her son “has several other health issues and has a hard time taking care of himself.” His last known address was in Nashville.

Montano was born in Illinois and moved to Tennessee with his family.

3. He Bought a Ticket to the Movie ‘Mad Max’ & a Drink From a Nearby Store

An ATF special agent and explosives K9 at the scene of the movie theater shooting in Antioch. (ATF/Twitter)

Police said Montano bought a ticket to the movie Mad Max: Fury Road and also purchased a drink from a nearby Family Dollar store, according to The Tennessean.

The weapons, an Airsoft gun and a hatchet, that police say Montano had at the theater. (Nashville Police)

Inside the theater, Montano attacked a 58-year-old man and his 17-year-old daughter, sending pepper spray into the theater and hitting the man in the shoulder with the hatchet. The man was not seriously wounded. He told reporters that other people in the theater helped him and his daughter. A 51-year-old woman was also treated for effects of the pepper spray. Police said there were about eight people inside the theater.

An officer responded to the theater, police said, and shot at the gunman before retreating. A SWAT team soon arrived and Montano was killed as he tried to exit the theater through a rear door of the theater.

Aerial video shot by local NBC affiliate WSMV shows what appears to be the man’s body outside the theater on a sidewalk.

Just got this video in from a viewer at the theater shooting scene. You can hear multiple shots being fired. pic.twitter.com/1FCl86oI7z

Nashville Police spokesman Don Aaron said their response was “swift.” The first officer on scene entered the theater and encountered the shooter. The officer fired at the suspect and then backed out while a SWAT team responded. The shooter, who was wearing a surgical mask, was killed after the SWAT team arrived. Police initially said the man fired at the officers, but they now say they haven’t confirmed if that is true.

Aaron said the pepper spray was so thick that the SWAT team had to go back for gas masks.

Police said Montano had two backpack-type bags, one with him and one he left elsewhere. The backpack Montano was wearing held a fake bomb, police said. The bags were detonated as a precaution.

4. He Was Arrested for Assaulting a Police Officer in 2004

Here's Vincente Montano's Rutherford County booking photo. It doesn't have a date, but he was arrested there in 2004 pic.twitter.com/uXJOv8URJT

According to police, Montano was arrested for assault of a police officer in Murfreesboro in 2004. The case was later dismissed.

It is not known if he had anything else on his criminal record.

5. The Incident Comes Weeks After a Deadly Shooting at a Louisiana Movie Theater

The shooting comes just weeks after a gunman opened fire at a movie theater in Lafayette, Louisiana, killing two people and injuring nine others.

Loading more stories
wpDiscuz
5
0
Would love your thoughts, please comment.x
()
x
| Reply
Vincente David Montano, 29, was fatally shot by police at a Tennessee movie theater. He was armed with an Airsoft gun, hatchet, pepper spray and a fake bomb.