An attorney who works in New York Governor Andrew Cuomo’s administration was shot in the head early Sunday morning in Brooklyn during festivities prior to the West Indian Day Parade.

The governor’s office said 43-year-old Carey Gabay is at a local hospital in critical condition after the shooting.

Gabay was caught in the crossfire during a gang-related shootout while walking with his brother during the J’Ouvert Festival, which began early Sunday morning, hours before the West Indian Day Parade, ABC 7 News reports. The NYPD told the news station that Gabay was “an unintended target,” and ducked behind a parked car, but was struck in the top of the head.

The shooting happened at about 3:40 a.m., just before the start of the J’Ouvert Festival at 4 a.m.

Governor Andrew Cuomo said in a statement that the shooting is another reminder that gun violence has to be stopped.

“This tragic shooting – this one by another seemingly random bullet – is the latest heartbreaking reminder that the crime of gun violence must stop,” Cuomo said.
Enough young, innocent people have died, and it must stop now.”

2. He Is the ‘Classic American Dream Story’

Gabay was born in New York City. “He worked his way up from the projects. He is the classic American Dream story,” Cuomo told the New York Daily News.

He went to Harvard for his undergrad degree and then also graduated from Harvard Law School. He previously worked at the law firm Jones Day from 2007 to 2009 and Schulte Roth & Zabel from 2002 to 2007, according to the governor’s office.

Cuomo said after the shooting of Carey Gabay that “the crime of gun violence must stop. (Getty)

Gabay has worked in Governor Andrew Cuomo’s administration since 2011, first as assistant counsel and since January as first deputy counsel at Empire State Development.

Cuomo said Gabay works for the state because he wants to give back.

“This was a beautiful man, a sweet man, a man who was giving back to his community, a gentleman, who was involved in nothing, just walking down the street with his brother,” Cuomo told ABC 7 News. “He was the lawyer who rewrote the rent laws that protected so many tenants.”

4. His Wife Is Expecting Their First Child

According to the governor’s office, Carey Gabay’s wife, Trenelle, is expecting their first child.

“He is just 43 years old and is a kind-hearted man. Carey is a friend to all who have the pleasure of meeting him. I ask that New Yorkers join us by keeping him, his wife Trenelle and his family in their prayers at this time,” Cuomo said in a statement.

Carey and Trenelle Gabay live in Brooklyn. A security guard at Gabay’s building told the New York Daily News that Gabay is Jamaican and his wife is from Trinidad.

“Him and his wife are two pleasant people. It’s sad, it’s sad, it’s sad. I am sure that he was not involved in any illegal activity. It’s terrible,” the guard, who asked not to be named, told the Daily News.

5. Three Other Men Were Shot & Another Was Fatally Stabbed During the J’Ouvert Festival

A man police said had a gun is arrested at the pre-West Indian Day Parade festivities. (Getty)

The shooting was part of a spate of violence during the pre-festivities for the West Indian Day Parade in Brooklyn.

According to ABC 7, a man was shot at about 2 a.m. during a separate incident and a 24-year-old man was fatally stabbed.

After Gabay was shot, a 21-year-old man was grazed by a bullet during another shooting. A third shooting happened later in the morning, where a 39-year-old was shot twice in the torso. That victim is in stable condition. 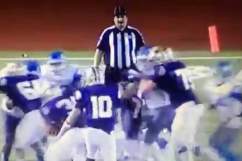