CNN’s chief political correspondent Dana Bash will be asking questions of the Republican candidates during the second GOP debate. (Getty)

CNN’s chief political correspondent Dana Bash will be one of the moderators during the second Republican primary debate Wednesday night.

Here’s what you need to know about Bash:

1. She Was Born in New Jersey & Graduated From George Washington University

Bash, born Dana Schwartz, was raised in Montvale, New Jersey. She is the daughter of Stu Schwartz, an ABC News producer, and Frances Weinman Schwartz, an author and lecturer on Jewish studies, according to her New York Times wedding announcement to Jeremy Bash. The couple later divorced and Bash later re-married, to fellow CNN correspondent John King, who she is also divorced from.

2. She Has Worked at CNN Since She Graduated From College in 1993

Bash has worked at CNN for her entire career, starting in 1993 after graduating from college, according to an August story in Politico. She started her career as a library assistant in the network’s Washington D.C. bureau.

According to her profile on CNN’s website, Bash also worked as an editor in the Washingto bureau, as the producer of the network’s public affairs shows and has covered Congress since 2006.

3. She Was a Member of CNN’s Peabody Award-Winning Coverage of the 2008 Presidential Campaign

Bash with Spencer Garrett at the CNN Correspondents’ Brunch at Toolbox Studio on April 26, 2015. (Getty)

Bash has extensive experience covering presidential campaigns, starting in 2000 when she covered the presidential primaries, according to her CNN biography.

She was part of the CNN team that won the Peabody Award in 2008 for its coverage of the 2008 election.

4. She Was Promoted to Chief Political Correspondent Earlier This Year

Bash was recently promoted to the position of chief political correspondent in August, according to a press release from the network. In an internal memo reported on by Politico, the network’s bosses praised Bash:

Dana is one of the best examples of a true CNN success story. Her career is an extraordinary example of how hard work and great news instincts can take you almost anywhere in journalism. Over the last 20 years, there are few people at CNN who have worked harder or done more for this news organization than Dana Bash. She is tireless, fearless, and 100 percent committed to outstanding journalism. But more important, she is one of our greatest colleagues – beloved by everyone from the field crews to the show producers. 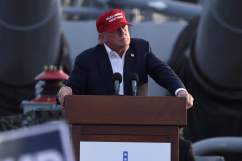 Veterans for a Strong America: 5 Fast Facts You Need to Know

5. Bash Was Married to CNN Co-Worker John King Until 2012