Throughout his political career John Boehner’s wife Debbie has been adamant that she and her husband are “just normal, average people.” She’ll be thrust back into the spotlight after a report emerged in The New York Times that the House speaker will resign from Congress and give up his seat in October 2015.

Here’s what you need to know about the great woman behind the man:

1. She’s Proud That She Wore a $100 Dress From Dillard’s When She Met the Queen

When John Boehner was first nominated to the role of speaker of the House, The New York Times did a profile on Debbie. In that piece, John Boehner called his wife “the most down-to-earth person you’ll ever meet.” She had bragged about not stressing over what she wears to important functions, such as a $100 Dillard’s dress she wore to meet Queen Elizabeth II.

The Times piece adds that she serves on the board of directors of the Community Foundation of West Chester/Liberty.

2. In 2010, Boehner Was Accused of Having an Affair With Lobbyist Lisbeth Lyons

The Boehner marriage has not been without its problems. In September 2010, John Boehner was accused by the Daily Kos of having an affair with printing industries lobbyist Lisbeth Lyons. The allegation was based in part on a supposed New York Times expose, which never appeared. At the time, a rep for John Boehner’s office told Page Six, “This is bulls**t. The American people oppose Washington Democrats’ job killing, so their desperate liberal allies are resorting to outright lies. It’s low, and it’s dirty.”

3. She Works as a Real Estate Agent in Ohio

According to her LinkedIn page, Debbie works as a real estate agent for Huff Realty in Ohio. She attends the St. Maximilian Kolbe Church in the Wetherington section of West Chester Township, according to a separate online profile.

She’s a graduate of Mount Healthy High School and the University of Cincinnati, which is where she met her husband. The couple were married in 1973. In addition to her real estate duties, The New York Times reported that at the time her husband was due to be named as one of the most powerful politicians in America, she was working as a cashier at a local gardening store in West Chester.

The couple have two daughters, Lindsay and Tricia.

4. A Bartender Who Thought He Was Jesus Told Debbie That He Had Been Planning to Poison Her Husband

John Boehner’s former country-club bartender was indicted and charged with threatening to kill the speaker of the House. Michael Robert Hoyt was arrested in October 2014 and indicted on January 7, 2015. According to court documents, Hoyt believed he was Jesus and John Boehner was the Devil.

In a brief statement at the time, Boehner’s press secretary Kara Hauck said the speaker and his family were “aware of the situation” and “sincerely thanks the FBI, the Capitol Police and local authorities in Ohio for their efforts.” Documents indicated that Boehner acknowledged knowing Hoyt but didn’t recall any animosity between the two. In one email to Debbie, Hoyt wrote, “I could have poisoned his wine at Wetherington many, many times.” When Debbie replied to Hoyt asking what he wanted, Hoyt said:

Mrs. Boehner, I was fired. I could not email Mr. Boehner directly because of the zip code block on his email. It doesn’t matter anyway. If he took a real interest in anything he would insure his Club was better than the Country, but they are exactly the same and life goes on SSDD. Sincerely, Mike. Mike, your former bartender.

He added that nobody checked the drinks he served Boehner and that it would have been “very easy to slip something in.” 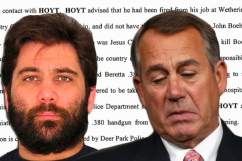 5. The Couple’s Daughter Lindsay Is Married to a Jamaican Construction Worker Once Busted for Weed

In May 2013, the couple’s daughter, Tricia, married a Jamaican construction worker named Dominic Lakhan in Delray Beach, Florida, reported the Daily Mail. In 2006 Lakhan was arrested for possession of marijuana, a drug his father-in-law strongly disapproves of.

The couple’s other daughter, Tricia, married a man named James Kinney in 2011. 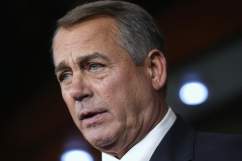 Why Is John Boehner Resigning as Speaker of the House?

Read More
5 Fast Facts, Breaking News, John Boehner, Politics
Throughout his political career John Boehner's wife Debbie has been adamant that she and her husband are "just normal, average people." Now, with news of Boehner's imminent retirement, she'll be thrust back in the spotlight one more time.