A manhunt is on for three suspects after a police officer in Fox Lake, Illinois, was fatally shot Wednesday morning, the Chicago Tribune reports.

The officer has been identified as Lieutenant Charles “Joe” Gliniewicz, ABC 7 reports.

The suspects have not yet been identified. Police have swarmed the suburban town in northern Illinois searching for the suspects. The officer was a long-time lieutenant with the Fox Lake department, WGN-TV reports.

CNN reported Tuesday afternoon that one suspect was in custody, but later retracted that report.

1. Police Are Searching for 3 Suspects

Police said during a news conference that they are searching for two white men and a black man suspected in the shooting of officer Charles Gliniewicz. The search includes local and state police, along with U.S. Marshals.

The #manhunt in #illinois where an #officer was shot. @RobElgasABC7 @Star1055 pic.twitter.com/PtvaLrlHvt

“At this time, we’re asking all area residents to remain inside. Report any suspicious activity, any suspicious people, by dialing 911 as we still have three offenders at large,” Lake County Sheriff’s Department Detective Chris Covelli told reporters.

2. Gliniewicz Radioed That He Was Following 3 ‘Suspicious’ Men Before He Was Shot

According to CBS Chicago, the officer radioed in at about 7:50 a.m. and said he was pursuing three suspects after looking into their “suspicious activity.”

Charles Gliniewicz was a 32-year veteran of the department, CNN reports. 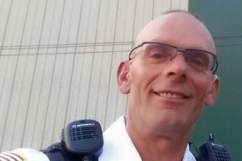 3. He Was Found Without His Gun & Other Gear By Officers Coming to His Aid

After police lost radio contact with Gliniewicz, they began searching for him. He was found in a marshy area suffering from a gunshot wound. He had been stripped of his gun and other gear, the Chicago Tribune reports.

According to the Chicago Sun-Times, an officer could be heard saying on the radio, “… send everybody you possibly can … officer is down …”

4. Schools Have Been Put Into Lockdown & Public Transit Was Halted

Police officers search for suspects in the killing of a Fox Lake officer. (Getty)

The local high school has been put into lockdown and other schools in Fox Lake were in “soft lockdown” because of the manhunt.

A message on the Grant Community High School’s website stated:

Grant continues to remain in a lockdown situation at the direction of the Fox Lake Police Department. All students and staff remain safe. Administrators have gone room to room to ensure all staff and students have been attended to. We will remain in lockdown until we receive direction from the Police Department that the community incident is under control and it is safe to move about the school building.

Metra’s Milwaukee District North Line was also shut down because of the search, the Chicago Tribune reported.

5. Fox Lake Is More an Hour North of Chicago

A police officer watches for suspects in the shooting of a fellow officer. (Getty)

Fox Lake is a village of about 10,500 residents located about 1 hour and 20 minutes north of Chicago in Lake County.

The manhunt has paralyzed the town.

“This is crazy, they think they are hiding behind my house so I can’t go home,” Christina Barcal told the Chicago Sun-Times. She said those who were in their homes are not allowed to leave. “My neighbor’s dogs had to go out so an officer took her dogs out to pee.” 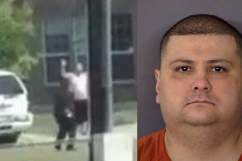