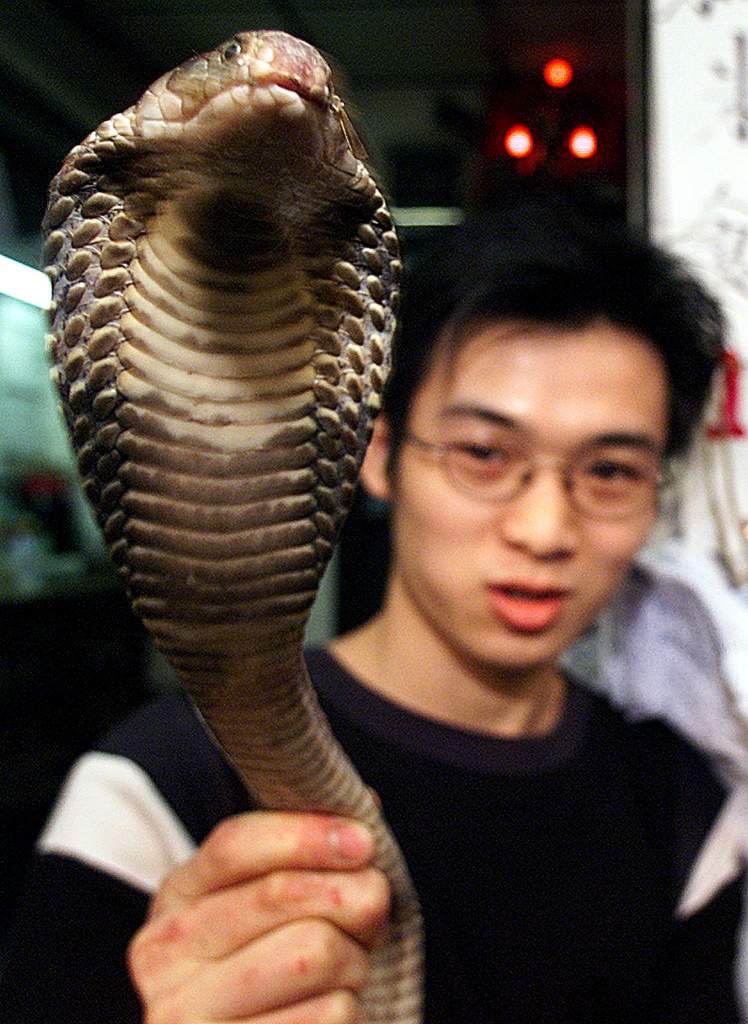 An employee of a restaurant in Hong Kong handles a king cobra that looks similar to the one that escaped in Orlando, Florida. (Getty)

After several days, it’s STILL missing. Residents of Orlando, Florida are keeping a close eye on their pets and their children after an eight-foot-long venomous king cobra escaped near an elementary school. The hunt has been on for the deadly snake for several days now, with no sightings as of yet. Nearby schools and businesses are taking precautions to watch for the snake, which escaped because of weather-related events. King cobras are among the deadliest snakes in the world.

1. The Venomous Snake Escaped Near an Elementary School

This is the female at the same house. The male, 8-footer is missing in #Orlando. @WESH pic.twitter.com/6B3BYnKK2h

The snake escaped from its owner’s home, near the 4800 block of North Apoka Vineland Road, the Orlando Sentinel reported. Residents are worried because this location is near Clarcona Elementary School, WFTV reported. The school has been taking precautions because of the escaped snake. All outside activities, including P.E. and recess, have been moved inside, Fox News reported. Portable classrooms have also been relocated to the main building.

Some publications are reporting that the snake is green-and-yellow in color, but others say it is green-and-white. King cobras are among the most venomous snakes in the entire world, according to National Geographic, can grow as long as 18 feet, and can “stand up” and look a person in the eye. They’re known for flaring a “hood” around their head and hissing in a way that sounds almost like a dog. They can deliver enough toxins in one bite to kill 20 people.

2. Reporters Are Telling Residents Not to Try To Catch It

Reporters are telling residents of Orlando not to try to catch the snake if they see it. (Some residents are wondering why anyone would try to do that!) If anyone spots the snake, they should call Florida Fish and Wildlife at 888-404-3922. Trappers are trying to use dead snakes as bait to lure the snake out of hiding, CNN reported. Reporters in Florida are definitely not taking this calmly:

3. It Was Owned By a Licensed Handler Who Runs an Exotic Animal Rescue

The snake is owned by a licensed handler, Mike Kennedy, who followed all necessary procedures immediately when he discovered it was missing, WFTV reported. (WESH, however, is reporting that he did not tell authorities immediately and might face criminal charges.) Kennedy runs Dragon Ranch, a non-profit rescue for exotic animals, and he stars in the Discovery Channel show Airplane Repo. The snake escaped after a series of storms caused the cage to flood and a tree limb to fall on the house, CNN reported. Kennedy and the Florida Fish and Wildlife Conservation Commission all have teams out searching for the snake. Kennedy said the whole situation is his worse nightmare and has been very traumatic for his family, CNN reported.

Finding the snake could be difficult, Kennedy told CNN. It escaped near a heavily wooded area and probably only wants to hide. Because it’s afraid of people, the snake is probably within 100 yard of the home, he added.

4. This Isn’t the First Time an Escaped Cobra Has Made Headlines This Summer 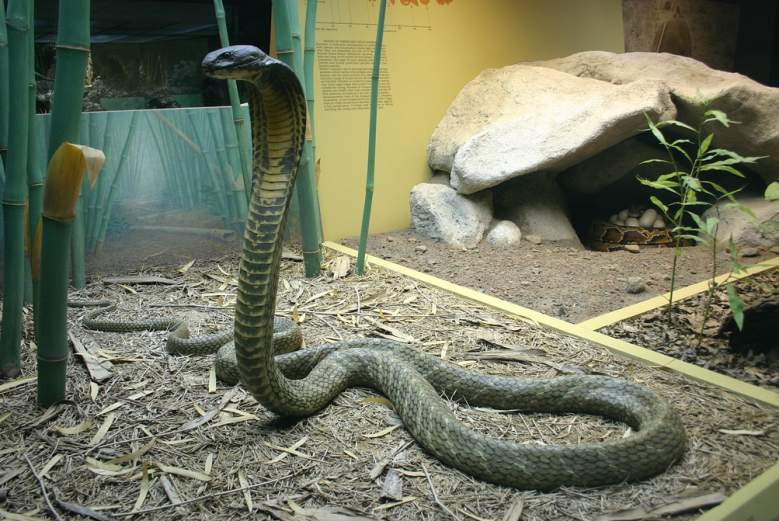 The king cobra that’s on the loose will look similar to the green-and-yellow cobra in this photo. (Flickr/ideonexus)

Back in July, an escaped cobra in Austin, Texas made national headlines after it bit and killed an 18-year-old male, Grant Thompson, USA Today reported. The cobra in this case was a monocled cobra, not a king cobra. Thompson was known in his hometown as “The Reptile Guy.” Police were investigating his death as possibly suicide by snake, KWTX reported.

Floridians are understandably not very happy about the idea of a highly venomous snake slithering around in their neighborhood. Reactions online have ranged from amused to absolutely terrified. Here are a few comments:

Mama just emailed me a link to article about escaped king cobra in Florida. BOOK TOUR JUST GOT REAL.

Apparently there's a king cobra loose in Orlando and they said not to panic. OH OKAY! #LockingMyselfInMyRoom

@AdrianWhitsett The way my year's been going that snake will be ringing my doorbell soon.

I can imagine my cat dragging this King Cobra in! "Look what I brought you!"

Meanwhile, some other people have turned the missing snake into a meme, including this tweet: 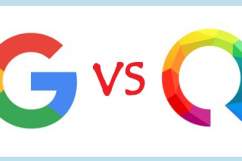 Did Google Rip Off Competitor Qwant’s Logo? 5 Fast Facts You Need to Know

Loading more stories
wpDiscuz
3
0
Would love your thoughts, please comment.x
()
x
| Reply
Florida residents are freaking out about a venomous 8-foot king cobra that escaped near an elementary school in Orlando. Find out more here.