Actor Jack Larson, who played Jimmy Olsen on the TV series The Adventures of Superman, died on September 20, 2015, at the age of 87. (Getty)

The actor who played cub reporter Jimmy Olsen on the original Superman TV series has died at the age of 87.

Jack Larson passed away at his home in Brentwood, California on September 20, Deadline reports. Larson was best known for his role in the Adventures of Superman, but was also a playwright and screenwriter.

1. He Was Born in Los Angeles

Larson was born on February 8, 1928, in Los Angeles, and was raised in Montebello. According to the New York Times, his father, George, was a milk-truck driver and iceman, and his mother, Anita Kalikov Larson, was a clerk at Western Union.

He dropped out of high school, believing his bowling talent would lead to a professional sports career. Larson started acting and writing his own plays in junior high school, the Times says in its obituary, and later enrolled at Pasadena Junior College to earn a high school diploma. While there, he was scouted by Warner Brothers and signed to a movie contract.

Larson’s first role was in the 1948 film Fighter Squadron.

2. He Starred on ‘Superman’ for 6 Seasons

3. Larson’s Life Partner Passed Away in 1993 After They Were Together for More Than 30 Years

Larson’s life partner, director James Bridges, died in 1993. They had been together since 1958. He was previously in a relationship with actor Montgomery Clift.

4. He Worked Mostly Behind the Scenes After the ‘Superman’ Series

After his role on the Adventures of Superman ended, Larson moved mostly behind the scenes, as a writer. The New York Times says in its obituary of Larson:

Although Mr. Larson was pleased that Jimmy Olsen developed into a comic role, his fears of being typecast were realized. After a particularly upsetting encounter with the producer Mervyn LeRoy, he was advised by the actor Montgomery Clift, with whom Mr. Larson was having a romantic relationship, to stop putting himself in those casting situations. So Mr. Larson gave up acting and made a new career.

Larson wrote several plays and musical librettos, including The Candid House, a retelling of the Hansel and Gretel story, a Broadway play about an epileptic magazine salesman and a comedy about being gay, according to the Superman Homepage.

Larson did make a few appearances in movies and on television later in his life. He appeared in the 2006 film Superman Returns, starring Brandon Routh, as Bo the Bartender.

His last TV acting role was on Law & Order: Special Victims Unit in 2010. He played Dewey Butler, the grandfather of a suspect accused of having unprotected sex with women while infected with HIV, in the episode “Quickie.” 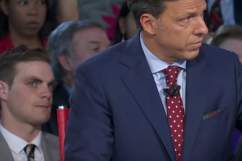