A 25-year-old St. Louis man has died after killing a rookie state trooper in Kentucky. The suspect, Joseph Johnson-Shanks, was killed during his arrest following the shooting death of Trooper Joseph Cameron Ponder on the night of September 13. The initial incident happened along Interstate 24 in Eddyville after Ponder had conducted a traffic stop on Johnson-Shanks. Moments later, Johnson-Shanks fled the scene with Ponder giving chase. Shortly after the high speed pursuit began, Johnson-Shanks fired shots into Ponder’s cruiser, killing him.

1. He Was Shot During His Arrest

WKYT reports that Johnson was injured during his arrest. An ambulance was seen leaving the scene of his apprehension. NC5’s Cuthbert Langley was the first to report that Johnson-Shanks had succumbed to his injuries. According to a statement from the Kentucky State Police, troopers caught up to Johnson-Shanks in the woods close to where Ponder had been shot. He was armed and allegedly aimed his gun at officers. When he refused orders to drop the gun, KSP troopers shot him. The statement says that he was rushed to Caldwell Medical Center in Princeton, Kentucky, where he died just before 8:30 a.m. Central time.

2. On the Same Month He Was Arrested for Destruction of Property, Johnson-Shanks Won a Lottery Prize

3. He Was From a Neighboring Suburb to Ferguson, Missouri

KSDK reports that Johnson-Shanks was from Florissant, Missouri, a neighboring suburb to Ferguson, the location of unarmed teenager Michael’s Brown’s death at the hands of officer Darren Wilson in August 2014. That shooting sparked of months of rioting as authorities chose to bring no charges against Wilson.

4. Trooper Ponder Just Graduated from the Academy in January 2015

Trooper Ponder was 31 years old. He was a native of Rineyville, Kentucky. He was stationed at Post 1 in Mayfeild, Kentucky. Ponder graduated from the Kentucky State Police training academy in January 2015, according to a statement from the KSP. 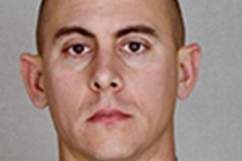 5. The Last Fatal Shooting of KSP Trooper Was in December 1988

Trooper Johnny Edrington was killed in the line of duty in Kentucky in December 1988.