Rowan County, Kentucky, clerk Kim Davis has been sent to jail for contempt of court. (Getty)

Kim Davis, a Kentucky county clerk who has refused to issue marriage licenses since the U.S. Supreme Court legalized gay marriage, has been sent to jail for contempt of court.

U.S. District Judge David Bunning ordered the Rowan County Clerk to jail until she complies with his order to issue marriage licenses, the Associated Press reports.

Davis has said her Christian faith should exempt her from signing the marriage licenses. She has refused to issue any licenses at all in the two months since the Supreme Court ruling.

According to the AP, Davis said “thank you” before she was led out of the court room by a U.S. marshal. She was not handcuffed.

WOWK 13 reports that Davis’ deputy clerks were given 30 minutes to decide whether they will obey the court, or they will also be sent to jail.

Read more about Davis at the link below: 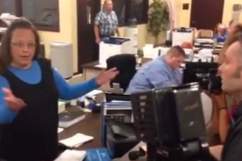 Loading more stories
wpDiscuz
11
0
Would love your thoughts, please comment.x
()
x
| Reply
Kim Davis, the Rowan County, Kentucky clerk who has refused to issue marriage licenses to gay couples, has been jailed for contempt of court by a federal judge.