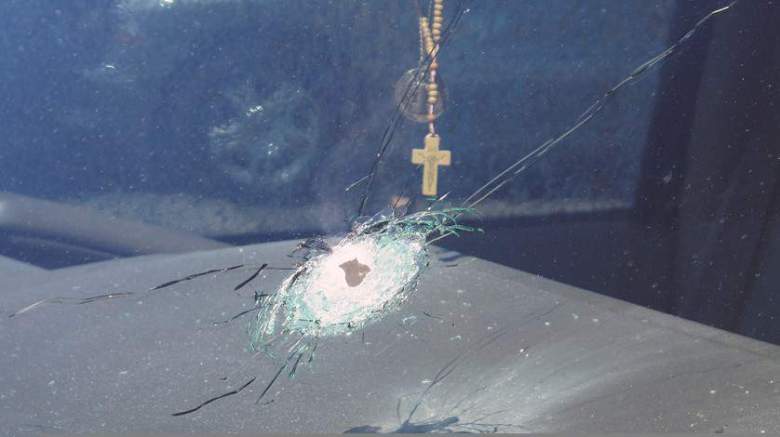 One of the vehicles hit by the shooter. (Arizona Department of Public Safety Photo)

Leslie Allen Merritt Jr. was arrested by a SWAT team for his suspected involvement in the Arizona highway shootings. Arizona Gov. Doug Ducey said in a tweet: “We got him!” At least 11 vehicles were hit by bullets in shootings along a Phoenix highway between August 29 and September 10. The Arizona Department of Public Safety referred to the shootings as domestic terrorism. The investigation is still ongoing.

1. Leslie Allen Merritt Was Arrested By a SWAT Team

Governor Doug Ducey first announced the arrest in an excited tweet, followed by a press conference where he gave more details.

BREAKING: We got him! DPS SWAT team is in custody of the individual suspected of I-10 shootings. Apprehended moments ago.

Leslie Allen Merritt, Jr. is 21 and was arrested by a SWAT team at a Walmart near 59th and Northern after being monitored all day. 12 News reported that he was with a woman and a 5-year-old when he was arrested and didn’t resist.

Merritt has a Facebook page where he goes by Les, which has been taken down since the news. The last post that he made to that Facebook page was around the same time as his arrest.  Just 12 hours before he was arrested, Merritt posted a photo of flowers he bought for his mother-in-law just because she asked.

He has made a series of political, pro-gun and anti-government Facebook posts too, including a post about the government possibly creating a black plague, a t-shirt that reads “Don’t ever think that the reason I am peaceful is because I forgot how to be violent!,” and a meme that reads “Long range shooting, it’s like golf…but for men.”

2. His 9mm Handgun Was Connected to Four Shootings

At least 11 vehicles were hit by the shootings in Phoenix, Arizona and Merritt’s gun has been connected to four. According to ABC 15, Merritt owned a 9mm handgun that he pawned at a local pawnshop on Friday. He was also the person who was registered as buying the gun. Lab analysis connected Merritt’s gun to four shootings. He faces 28 felony charges that include intentional acts of terrorism, drive by shooting, aggravated assault with a weapon, criminal damage, endangerment, discharging a firearm within city limits, and disorderly conduct involving a weapon, 12 News reported.

During his initial court appearance on Saturday, Merritt told the judge, “I’m the wrong guy,” 12 News reported. His bond was set for $1 million in cash due to the “dramatic and profound threat” he places to the community. When he heard the bond, he said in a shaky voice: “I could never afford that bond,” AZ Central reported.

Although some news reports say he pawned his gun on Friday, Merritt said that he pawned the gun two months ago and hasn’t had access to a weapon since. There is conflicting information about this report, however. KPHO reported that the probable cause statement for his arrest includes statements from police about interviewing Merritt and Merritt’s saying that he was only not in possession of the gun when he pawned it temporarily for money, but the gun wasn’t pawned during the shootings. Merritt’s father, however, confirms Merritt’s story and said that Merritt pawned both his guns for family expenses shortly before the shootings started, ABC News reported.

Merritt’s father, Leslie Merritt, Sr., told AZ Central that there was no way his son could be the freeway shooter. It has to be a mistake or because of the reward, he insisted. His father told AZ Central that Merritt works 12 to 15 hours a day as a landscaper and there’s simply no way he could be the shooter. Leslie’s significant other (it’s unclear if she’s his girlfriend or wife) posted in support of Leslie, and her friends and family left comments that they knew there was no way Leslie could have done this.  Just hours before he was arrested, Merritt posted on his Facebook that he had worked overtime, for 11 hours straight, and now it was his payday.

3. A Car Connected to Merritt Had “Criminal Control” Bumper Stickers On It

Witnesses told AZCentral that they saw a gold Saturn being fingerprinted before it was loaded onto a tow truck. The car had bumper stickers on the back that read “Criminal Control Not Gun Control” and “Mo Money Pawn.” Mo Money Pawn is the shop where Merritt’s 9mm gun was pawned. The pawnshop stated on Facebook that at the request of investigators, it provided several weapons for testing.

Merritt also apparently has a criminal history. ABC15 reported that in 2013, he was charged twice by the Phoenix Municipal Court, once for failing to stop at a scene involving a damaged vehicle, for which he pleaded guilty. The second was assault and criminal damage; the charges were later dismissed. He also had three cases in family court in 2012 and 2013. In one he filed for an order of protection against a redacted name, and the 2013 cases involved his children. No additional details were available. 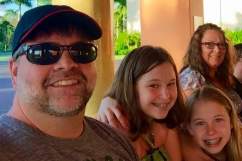 Why Did Brian Short Kill His Family? 5 Fast Facts You Need to Know

4. It’s Unclear If All the Shootings Were Connected, But Authorities Have Connected Him to Four

Police are unsure at this time if all 11 of the shootings were connected, according to Arizona Central. However, 12 News reported that he was believed to be the shooter for at least four of them and others might have been copycats. There were no serious injuries or fatalities from the shootings. Different weapons were used in the shootings and the investigation is continuing.

Map of the highway shootings in Arizona. Leslie Allen Merritt was connected to four so far. (Google Maps)

Interestingly, on the Facebook page that is likely Merritt’s, he posted stories on September 13 about the copycat arrests.  Preston Phillips of 10 News reported that Merritt posted a photo of himself, watching the police from a few feet away, in early September.

The 11 confirmed shootings are listed below, as provided from the Department of Public Safety:

Authorities from Silent Witness were offering a $50,000 reward for information leading to the arrest of the person or people responsible for the shootings, Arizona DPS reported. Arizona DPS Colonel Frank Milstead said the crime was cold-blooded and there should be no benevolence for the person, CNN reported. Merritt’s father can’t believe his son was responsible and thinks the reward caused someone to falsely turn him in, AZ Central reported. ABC15  reported that Merritt’s dad had his own rap sheet that included a weapons violation. 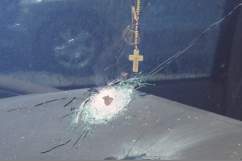 5. Another Suspect Was Arrested On Unrelated Charges But Later Let Go

Oscar De La Torre Munoz was arrested for a probation violation and suspected of being involved in the shootings, but he was let go about a week later. (Mugshot)

Oscar De La Torre Munoz was being held on drug-related charges on September 12 and he was named a “person of interest” in the shootings. He was booked on suspicion of marijuana possession, but was ordered released a week later, ABC 15 reported. Munoz claimed that offers were aggressive when they arrested him an aggravated a back injury. After Merritt was arrested, Munoz told Kim Tobin from ABC 15 that he did not know Merritt. 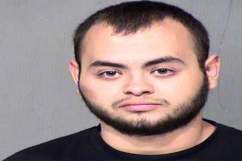 Loading more stories
wpDiscuz
4
0
Would love your thoughts, please comment.x
()
x
| Reply
Leslie Allen Merritt was arrested in connection with the Arizona highway shootings. His father can't believe he did it. Here's what you need to know.