Medics working on one person outside of Capitol now. #LNK #LNK911 pic.twitter.com/3l2l6B9hwB

A black man was shot at least three times as he ran from sheriff’s deputies outside of Nebraska’s state capitol building. The shots were fired just after 1 p.m. on September 22 in Lincoln.

Still a ton of police/deputies out here. #LNK #LNK911 pic.twitter.com/GOVRcTEbvT

2. The suspect is the only victim in the shooting so far, reports the Omaha World-Herald’s Paul Hammel. He is an African American male and has been rushed to a local hospital.

3. The law enforcement involved in the shooting is the Lancaster county sheriff. The shooting happened outside of the capitol.

4. There is a massive police and sheriff’s department presence at the capitol. Schools in the area were locked down for approximately 30 minutes after the shooting.

5. The Lincoln capitol building is the primary executive, judicial and legislative offices for the State of Nebraska. 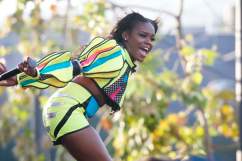