A 45-year-old geography professor at Delta State University in Cleveland, Mississippi, has committed suicide following the fatal shooting of his girlfriend and a colleague at separate crime scenes 300 miles apart. Suspect Shannon Lamb‘s girlfriend was found dead in the town of Gautier, Mississippi, on the morning of September 14. Shortly after her body was discovered, Lamb’s colleague, history professor Ethan Schmidt, was gunned down inside his office on the school’s campus. The town of Gautier, where Lamb was a resident, is 300 miles south of Delta State University.

At around 10:30 p.m. local time in Mississippi, there were multiple reports that Lamb was pulled over by police at 2197 Highway 1 North in Greenville, his hometown. It’s about 40 miles south of Delta State University.

Lamb fled on foot and then shot himself in the head before he could be taken into custody. Paramedics have been called to the scene of his arrest. Prior to his arrest, Lamb spoke to Gautier Police Chief Dante Elben, the suspect said “he wasn’t going to jail.”

On Lamb’s Facebook page in April 2013, the professor wrote that he was a single parent to a teenage boy and girl. Lamb said about his kids, “Both are straight “‘A’ students, extremely loving and respectful of others.”

Lamb, a geography professor at Delta State, worked at the school for seven years, according to his official profile. His profile adds that he teaches World Regional Geography, Methods in Social Studies, and Social Studies in the High School.

Lamb, who earned a Ed.D in education from Delta State earlier this year, listed his areas of research as Public Memory Suppression and the Hidden Landscape. Prior to moving to Delta State, Lamb taught Geography at Mississippi Valley State University. Many reports said that Lamb had taught at Itawamba Community College but in a message to Heavy.com, that school said he never actually worked there, taking a role at Delta University, before he could take up a role at Itawamba.

According to Lamb’s Facebook page, he’s a native of Munich, Germany. However a source told Heavy.com that he’s really native of Greenville, Mississippi.

An avid musician, Lamb played in a rock and roll two-piece band, gigging regularly across Mississippi. In his About section on his Facebook page he wrote, “I was born in a crossfire hurricane,” a lyric from the Rolling Stones song “Jumping Jack Flash.”

Lamb is an avid musician who has played gigs in public. Above, a concert promotion posted to his Facebook page lists him as the headliner. Abigail Osteen is Amy Prentiss’ daughter.

In a comments thread under a picture of his daughter’s prom photo he writes, “Hopefully I won’t need the shotgun, but it’s better to have one and not need it than need one and not have it!”

If You Prefer to Get Your News in Spanish, You Can Get the Full Story on Shannon Lamb Here

3. He Called Police to Report That His Girlfriend Had Been Killed

The Biloxi Sun Herald first reported that a victim related to the shooting at Delta State had been found dead in the town of Gautier. It was Lamb who called police to report that killing. A neighbor told the paper that she heard a loud noise at around 4:30 a.m. but said it didn’t sound like a gun shot, more like a car wreck.

That victim was Lamb’s girlfriend. On Lamb’s Facebook page, he names Amy Prentiss as his girlfriend. She was a volunteer at a local church. Upon completing his doctorate, he wrote on his Facebook page that he had “tried to maintain a relationship with the best girl in the whole wide world. (Amy Prentiss).”

4. The Victim, Professor Schmidt, Once Thanked Lamb in One of His Books

Ethan Schmidt, the professor shot at Delta State, was seen by students being taken away by ambulance. The history professor later died, according to the school. Professor Schmidt was in his office when he was shot, reports WMC.

Murdered #deltastate prof. Ethan Schmidt once thanked suspect Shannon Lamb in one of his books. pic.twitter.com/eR9yLh6nml

In one of his books, Schmidt thanked Shannon Lamb. See the excerpt above. 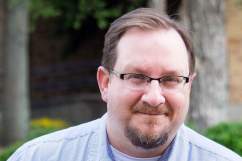 The Biloxi Sun Herald reports that Lamb had moved to Gautier in June 2015. A neighbor described him as “nice” to the paper. That friend added that she would see Lamb and his girlfriend often sitting outside their home with him playing guitar. She also said that she didn’t know what the couple would do now that school was back in session. A student at Delta State, Noah York, told WMC “He was a cool dude. I mean, you never would have thought anything like this would happen,” he said. “It’s just that dude, you want to be like him, you know, you want to play guitar, kind of a guy like that, just into rock roll.”

Delta State University is one of eight publicly funded universities in the state of Mississippi. There are 3,324 students at the school. The school’s president is William N. LaForge, former Chief of Staff to United States Senator Thad Cochran of Mississippi. LaForge is a former student of the school.

The school specializes in arts and sciences, business, education and nursing. The college is also home to a renowned flight school. The school turns 90 years old in 2015.