A storm brewing in the Atlantic Ocean could bring a tropical storm to the East Coast this coming weekend.

The National Hurricane Center says Joaquin is expected to move slowly westward over the next few days. It strengthened from a tropical storm to a hurricane Wednesday morning.

The storm’s path could bring heavy rain and wind to the Atlantic Coast, from North Carolina to southern New England. It is currently swirling between Bermuda and the Bahamas, according to Weather.com.

“The official National Hurricane Center forecast track has shifted significantly farther west, putting much of the U.S. East Coast within its potential path. However, uncertainty is unusually high due the presence of several other disturbances near the East Coast later this week, and it’s entirely possible that Joaquin may never make landfall at all,” Weather.com says.

For updates on the storm, see the link below:

It is still too early to determine where Tropical Storm Joaquin will make landfall, if it does.

2. It Strengthened Into a Tropical Storm Monday Night

JUST IN: Tropical depression eleven has just been upgraded to a tropical storm named Joaquin. pic.twitter.com/ukrlveqwjs

According to the National Hurricane Center, the storm strengthened from Tropical Depression 11 into Tropical Storm Joaquin Monday night.

At 1100 PM EDT (0300 UTC), the center of Tropical Storm Joaquin was located near latitude 26.7 North, longitude 70.4 West. Joaquin is moving toward the southwest near 5 mph (7 km/h). A slow westward motion is expected during the next couple of days. Maximum sustained have increased to near 40 mph (65 km/h) with higher gusts. Slow strengthening is forecast during the next 48 hours. Tropical-storm-force winds extend southeastward up to 105 miles (165 km) from the center.

3. The Storm Is Expected to Turn North & Accelerate

Hurricane specialist John Cangialosi told the New Orleans Times-Picayune that thunderstorm activity in Tropical Storm Joaquin has increased over the past several hours.

Cangialosi said the storm will continue to move slowly west before it turns north and accelerates.

4. Joaquin Could Combine With Another Storm System to ‘Soak’ the East Coast

Tropical Storm Joaquin has formed and will get stronger. NHC tracks up east coast for the weekend. Impacts likely. pic.twitter.com/fE1X1HtIcg

AccuWeather.com says Tropical Storm Joaquin could combine forces with another slow-moving storm system to bring heavy rain that will soak the northeast this week and through the weekend, causing an increased risk of flooding.

“While it will not rain continuously in the Northeast this week, this is a significant pattern change for the upper mid-Atlantic to New England following many days and weeks of dry weather,” AccuWeather Chief Meteorologist Elliot Abrams says.

5. It Is the 10th Named Storm of the Hurricane Season

According to National Hurricane Center, Joaquin is the 10th named storm of the Atlantic Ocean’s hurricane season.

The last named storm was Tropical Storm Ida, which was named on September 18, but then was downgraded back to a tropical depression on September 24.

Two storms have reached the hurricane level, Hurricane Fred and Hurricane Danny, both in August. 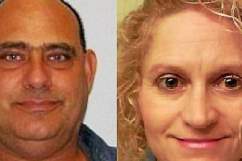