An aspiring NBA player and brother of an HBO star was gunned down in cold blood on the streets of Los Angeles. Wendell Lee, 25, was shot dead on the night of September 22 in the neighborhood of Willowbrook. His brother, London Brown, stars alongside Dwayne “The Rock” Johnson in the sports comedy series Ballers. While investigators seek to link the crime to a gang feud, Lee’s family insists he had no part in gang life, making the slaying even more mysterious.

1. The Gunman Didn’t Say a Word Before Opening Fire on Lee

Lee had been visiting a female friend in the 12200 block of Elva Avenue in Willowbrook when the shooting took place. The Los Angeles Times reports that a group pulled up in a sedan and a man emerged from the back seat. He didn’t say anything before opening fire on Lee. He was hit multiple times in the chest.

The woman was unharmed. Lee was rushed to a nearby hospital where he was pronounced dead just after midnight on September 23. His family set up a Go Fund Me page to help pay for his funeral costs.

2. He Was Trying Out for the Lakers’ Minor Team

Lee, a shooting guard, was one of 40 players recently invited to try out for the Los Angeles Lakers’ minor team, the D-Fenders, reports the Los Angeles Times. The team’s spokesman told the paper that Lee has been a “personable guy” who didn’t have any problems with other players on the team. According to the basketball website for Colorado State University, Lee was a “basketball standout” at the school, which is located in Pueblo. He graduated in 2014, majoring in exercise science. During his time on the team, he scored 522 points. His coach at the school, Ralph Turner, said in a statement, “It’s always sad when you lose someone, no matter how old they are, but to think that Dell died with so much music left in him is a sad thought to consider.”

Lee’s celebrity brother, London Brown, told KTLA, “I think my brother, for sure, could have gone all the way.”

3. His Brother Stars With The Rock in HBO’s ‘Ballers’

Lee’s brother, actor and comedian London Brown, is best known for his role as Reggie in the HBO comedy Ballers, which stars Dwayne “The Rock” Johnson. According to his IMDB page, Brown is a native of Los Angeles who, in addition to his role in Ballers, starred in the Fuse Network series The Hustle. In 2013, Brown won the Best International Comedian award at the 2013 Black Comedy Awards in the United Kingdom.

This Sunday… Please dont type any condolences. Or all the other sad stuff u guys been sendin. Save that for ur page. Im ok.

On his Instagram page, Brown asked his followers not to post condolences to him because “I’m OK.” At a vigil for his brother, Brown told KTLA, “The people who are out doing these things, someone didn’t reach out to them early enough — to help prevent these things from happening.”

4. He Identified Himself as a ‘Church-Going, God-Fearing Man’

Lee was also passionate about music, performing on several YouTube videos singing and playing the piano. In one video, he’s described as a “church-going, God-fearing man.” Though he loved music, his goal had been to make it as a professional basketball player. According to his Colorado State University profile, Lee was a native of Los Angeles, where he graduated from George Washington Prep High School. His parents are Wendell and Merry Lee. In total, he had five siblings. His mother told KTLA, “He had such a big heart. [His vigil] is just a testament to who he was.”

5. He Tweeted to His Followers Just Hours Before His Death

Stay sharp… Tuck & stay at it!

Lee’s last tweet was posted just two hours before his death. In it he reminded his followers to “Stay sharp… Tuck & stay at it!” He regularly quoted scripture on his page as well as words of encouragement. In his description he wrote, “Find a way to get it done #ItsPossible.”

Just prior to that posting, he had been active on his Instagram account, where he posted this message: “At the transition segment from my spring to my summer, I started to just flow w/ God & stop asking questions crazy questions. Indescribable blessings out of my control & better understanding have takin place and still continue to… I’m just gonna sit back & let the vision unfold. #GloryToGod”

At the transition segment from my spring to my summer, I started to just flow w/ God & stop asking questions crazy questions. Indescribable blessings out of my control & better understanding have takin place and still continue to… I'm just gonna sit back & let the vision unfold. #GloryToGod 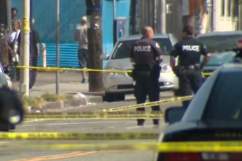 Loading more stories
wpDiscuz
0
0
Would love your thoughts, please comment.x
()
x
| Reply
An aspiring NBA player who was the brother of an HBO star was gunned down on the street in an unexplained murder in Los Angeles.