A co-worker described Chambers as “mature and responsible”. (Facebook)

The driver of the car that crashed into a crowd of spectators and killed four people Saturday at Oklahoma State University’s homecoming parade was sent home from her job at a local burger joint on Saturday morning because her supervisors “thought she was on drugs,” one of the woman’s co-workers told Heavy.

The co-worker, who asked not to be identified, told Heavy that 25-year-old Adacia Chambers , the suspect in the crash, was generally “mature and responsible” and that she was “completely shocked” to hear of Chambers’ involvement in the crash.

The two work at a Freddy’s Frozen Custard & Steakburgers, a franchised restaurant in Stillwater. She said that Chambers is wearing her work shirt in the accident and subsequent arrest photos.

While the two weren’t friends, the co-worker said that Chambers “kept to herself, (and was) definitely not as loud and social as the others.”

Asked if anything was different about Chambers lately, the co-worker said, “Nope, not at all. She worked this morning though and people said she ‘looked like she’s on drugs.'” Chambers was supposed to work from 9 a.m. until 3 p.m., but was sent home early “because they thought she was on drugs.” Chambers also worked until “at least midnight” on Friday night.

She told us that Chambers worked Friday night and then Saturday morning, while her father indicated that Chambers went out for Homecoming festivities. That would make for an exhausting run, and could have played a role in Chambers’ state at the time of the accident. 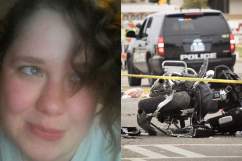 Loading more stories
wpDiscuz
92
0
Would love your thoughts, please comment.x
()
x
| Reply
A co-worker tells Heavy that Adacia Chambers showed up to her job this morning but was sent home for "looking like she was on drugs."