Arkell and Dana Graves posted a viral pregnancy video in September that captured the attention of almost 10 million viewers. (Facebook)

Arkell Graves and Dana Griffin-Graves, the couple who posted a viral video one month ago about finally having “a bun in the oven,” gave birth to their baby over a week ago. Baby Kaleb is still in critical condition in the hospital but Dana has been discharged and is back home. He has been able to open his eyes and was taken off of some of the medications he was on.

Dana originally surprised her husband by putting actual buns in the oven and pictures of the sonogram to tell him that they were pregnant. 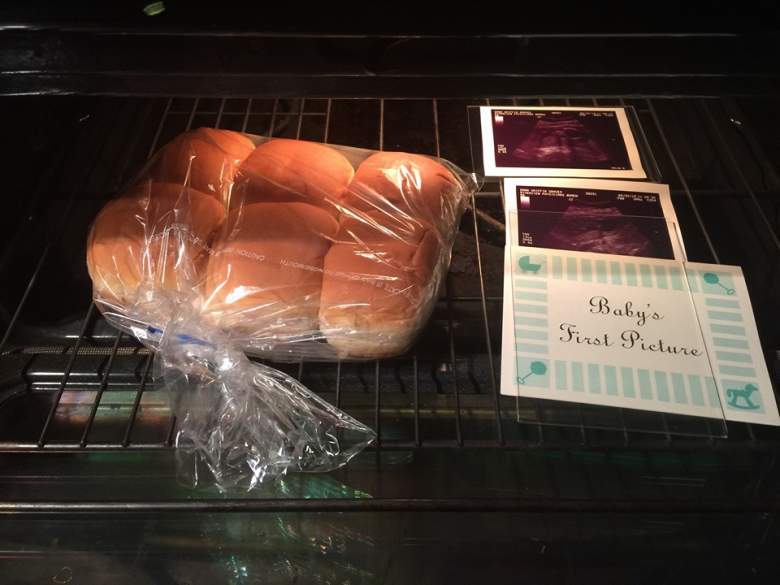 Dana Graves left this message in the oven to surprise her husband, Arkell, with the news of her pregnancy.(Facebook)

Here’s what you need to know about the Graves family:

1.Dana Posted Her Pregnancy Announcement Video on YouTube in September

She captioned her video:

Have your tissues ready! After 4 miscarriages and 1 stillborn birth, we had given up on the idea of having babies of our own, especially at our age…But God!

The video captured the attention of almost 10 million viewers.

“His reaction was just priceless. I wasn’t expecting that at all. I knew that he would probably be emotional but I definitely was not expecting the reaction I received,” Dana told 8News in September.

After just 24 weeks Kaleb Arkell Graves was born 16 weeks premature. “He is tiny in statue but he is a fighter. He is in stable but critical condition,” according to this post on Facebook.


The Graves were told right away that the baby doesn’t have a good chance of surviving.
“With only a 5% chance of survival, Kaleb is here. I’m grateful to God, my wonderful husband Arkell and my amazing family,” according to a post on Facebook.

The Graves update their Facebook with the status of Dana and Kaleb’s health. They said he opened his eyes for the first time the other day, was taken off of his two medications and even held his parents’ fingers.

It is worth mentioning that it appears the Graves do already have a child, possibly from another marriage or adoption, because in the latest post on their Facebook page Dana writes, “Keelyn met his little brother for the first time today.” Also, this image says, “Every morning Keelyn prays for my stomach!” It is not confirmed how Keelyn is related to the Graves. 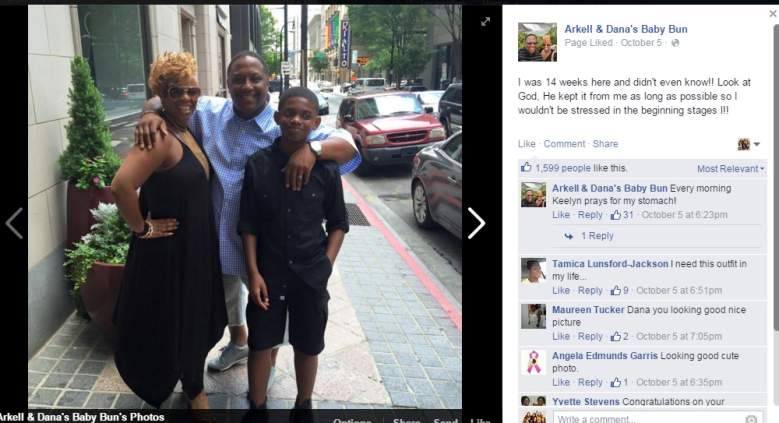 3.Dana Was in Critical Care But is Now Home

Dana Graves shown here capturing the progression of her pregnancy.(Facebook)

Dana was in the intensive care unit for a few days before officially having Kaleb on October 20. She wrote on Facebook,

When I arrived in the Intensive care unit over a week ago, they told me in order to save my life, I had to terminate his, My blood pressure was 223/113 but I couldn’t…he was my miracle an I had to give him a fighting chance to make it. Daily I was told how my chances of survival were declining because of my heart functions and chronic blood pressure.

According to a post on their Facebook page, “Dana is in critical care, her body has endured all it can take.”

The Facebook page was later updated once Dana returned home on October 27. It is not clear her exact health status, but the post also asks for people’s prayers during her recovery.

4. They’ve Been Trying to Have a Baby for 17 Years 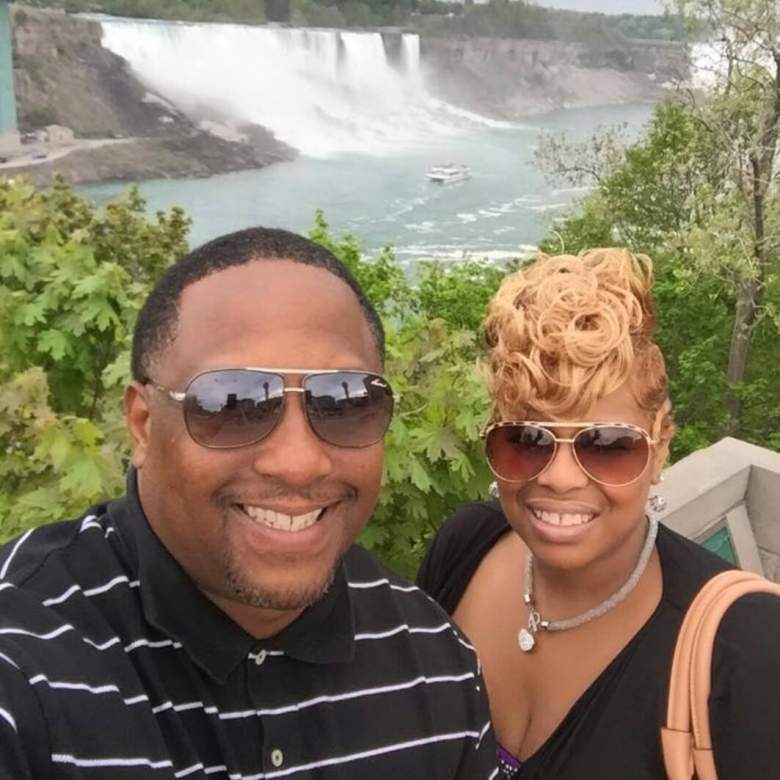 According to Buzzfeed News, the Graves have been trying to get pregnant since they got married 17 years ago. After four miscarriages and a still birth they finally had success with baby Kaleb.

Dana told Buzzfeed News the couple decided to give up about five years ago. “We had everything planned. It just didn’t work out, so we kind of gave up,” she said. Then, when they weren’t trying to get pregnant, they did. Dana told Buzfeed News, “I was ecstatic. We hadn’t planned anything, we weren’t trying.”

Here is a picture of Arkell in scrubs post Kaleb C-section. The caption reads,

Proud daddy waiting to go in the operating room with me. Arkell watched the entire surgery, he swears he knows how to deliver a baby by C section now!! #MyNoseyMan!

5. People Are Sharing Support Stories About Their ‘Miracle’ Babies 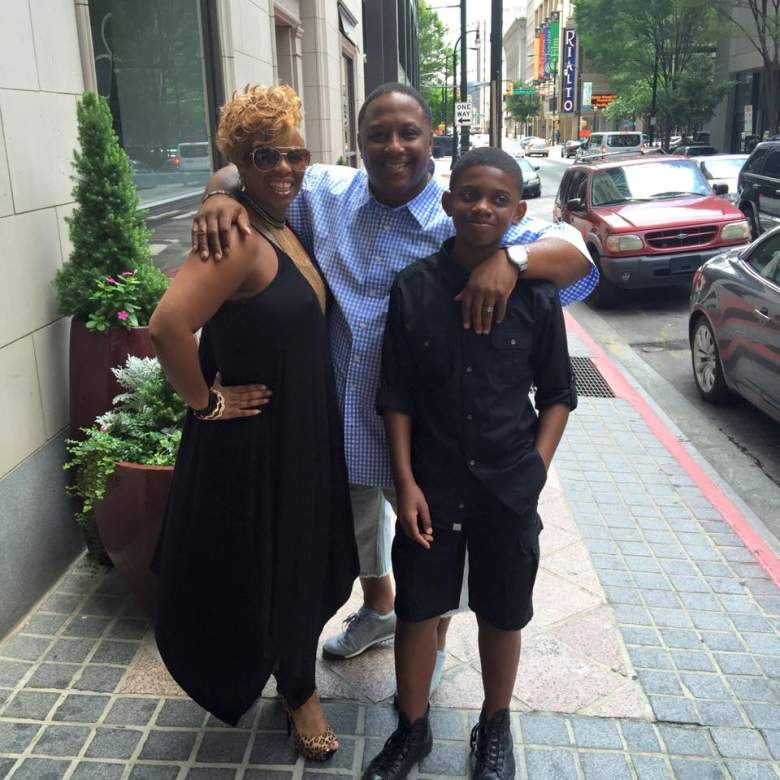 Dana writes, “I was 14 weeks here and didn’t even know!! Look at God, He kept it from me as long as possible so I wouldn’t be stressed in the beginning stages l!!” (Facebook)

On the couples Facebook page titled, ” Arkell & Dana’s Baby Bun” with about 90,000 likes, people have been posting words and images of encouragement about their miracle babies. Whether it’s their own children or babies in their families, people are posting on the page in support of the Graves and sending prayers their way.

Dana was shocked by the public’s reaction to her video and told Buzzfeed News, “I thought that this was going to be for family only.” 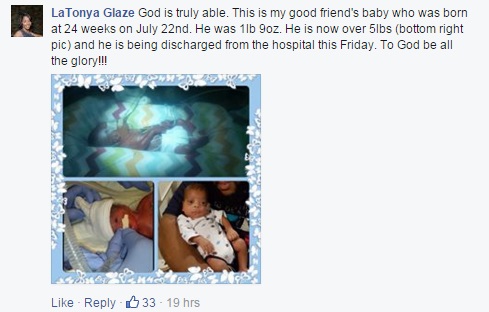 This user shares the story of her friend’s child who was born at 24 weeks, like Kaleb, and is still alive and leaving the hospital soon. 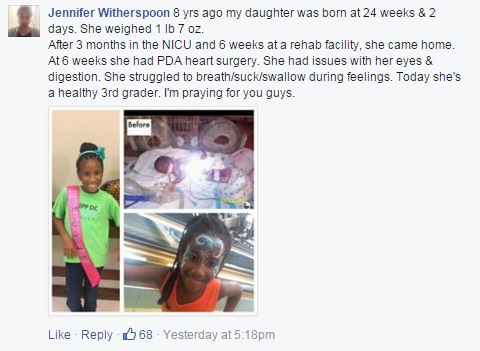 This person shared the story of her daughter, now eight, was in the NICU for three months after being born at 24 weeks. “Today she’s a healthy 3rd grader.”

This person sends her blessings to the Graves family as she shares the story of her niece and friend’s son who were both premature and now healthy. 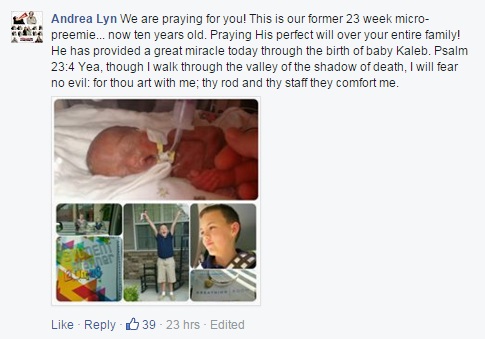 This person shared a picture of her 10-year-old who was premature along with a psalm from the Bible, “Yea, though I walk through the valley of the shadow of death, I will fear no evil: for thou art with me; thy rod and thy staff they comfort me.”

“All things are possible to them that believe,” says this post showing a healthy 12-year-old who was 1lb. 5oz. at birth.

This post is from Kaleb’s aunt who claims she named the baby before he was even born. 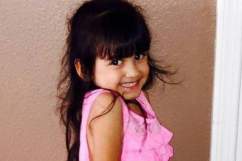